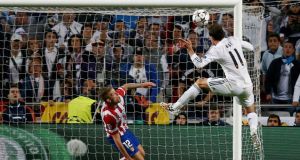 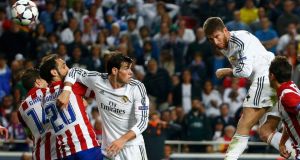 Real Madrid 4 Atletico Madrid 1 (after extra-time): Real Madrid secured a 10th European Cup when they snatched a stoppage-time equaliser before extra-time goals by Gareth Bale, Marcelo and a Cristiano Ronaldo penalty gave them a 4-1 win over Atletico Madrid in the Champions League final on Saturday.

Atletico, who won the Spanish league title a week ago, looked set to complete a double after Diego Godin’s 36th-minute header, helped by a blunder from Real goalkeeper Iker Casillas, put them in control of the first European final between teams from the same city.

Real attacked relentlessly in the second half at Lisbon’s Estadio da Luz but had to wait until the third minute of stoppage time for an equaliser when Sergio Ramos headed in powerfully from a corner.

Atletico looked a spent force in extra time and Real completed the comeback win when world record signing Bale headed them into the lead in the 110th minute before Marcelo slammed in a late third.

Ronaldo, the Portugal captain playing in his own capital city, scored the fourth from the penalty spot to clinch an astonishing turnaround and a double of Champions League and King’s Cup after Real could only finish third in La Liga.

“Incredible, what can I say? It was our aim from the start of the season,” said Real coach Carlo Ancelotti. “It was difficult but I think we deserved it in the end.”

Ramos added: “I think we are all heroes, it is a team effort and we can all now celebrate together. We have lived through a lot together and then we had to wait until the final minute to equalise. Now Lisbon is our home.

“It is a reward for all the sacrifice and the fight we have shown over the years.”

Atletico took the lead when their city rivals failed to clear a corner and they hooked the ball back into the box.

Casillas, who came rushing out of his goal, was left stranded in no man’s land as Godin beat him to the ball and headed towards goal. The goalkeeper rushed back and attempted to scoop the ball out but it had already crossed the line.

It was a notable double for Godin who headed the goal in last week’s 1-1 draw at Barcelona that secured Atletico’s first league title since 1996.

Real then applied the pressure and it finally paid off when Ramos headed the equaliser to force extra time.

The first period of that ended without another goal, but Real finally took control of the game in the last 15 minutes when Bale headed them in front in the 110th minute before Marcelo fired home the third and Ronaldo scored from the spot.

“It was a sad moment, tragic when they got the 1-1,” said Atletico midfielder Gabi. “They had few chances but they did better in extra time. We were very close but they were very strong.

Atletico defender Juanfran added: “We fought to the end but then Sergio caused problems with the goal. We will return. They won so they are the just winners but still we have won the league and got to the final of the Champions League.”

Ronaldo’s goal was his 17th of the campaign, an all-time record for the competition, and meant Ancelotti became only the second man after Bob Paisley of Liverpool to win three European Cups as a coach after the Italian’s triumphs with AC Milan in 2003 and 2007.