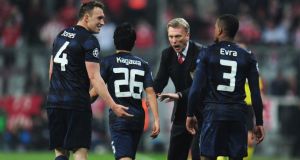 David Moyes said his transfer targets will still want to come to Manchester United even though he cannot offer them Champions League football.

United went out of Europe’s top club competition with a 4-2 aggregate defeat to Bayern Munich on Wednesday.

Given that United are seven points adrift of the Premier League top four with five matches left, their chances of qualifying for next season’s tournament are very slim.

Moyes is confident that the lure of playing for such a historically successful club will be enough to persuade top players to come to Old Trafford during this summer’s rebuilding.

“My focus is on getting a side together to get back in the Champions League,” the United manager said. “We’re looking to spend the right money on players who are available and it’s not anything to do with Champions League. Any players we’ve quietly discussed it with are more than happy to join Manchester United.”

The need for reinforcements in defence became clear at the Allianz Arena when United conceded less than a minute after taking the lead through Patrice Evra’s stunning finish. United lost 3-1 on the night.

“It’s the sort of thing you learn as a schoolboy – once you score a goal, make sure you don’t concede,” Moyes said. “You get into position and do your job. We had concentrated so fabulously well throughout the game.

“The players had done tactically well. Their positioning was good and they did their jobs. For us just to give it up on that moment, the goal up, was really disappointing.”

Moyes’s task was not helped by two glaring misses from Wayne Rooney, who played with a pain-killing injection in his injured toe. The manager defended his decision to select the player even though his injury was clearly inhibiting him.

“I thought he was having a struggle striking the ball on some occasions. I was concerned that he hadn’t trained all week and he had taken an injection. But he is so vital a player to us, especially with Robin van Persie out [INJURED]. He just had a couple of opportunities and he couldn’t quite take them.”