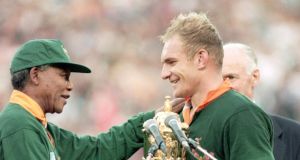 An iconic moment in history as Francois Pienaar of South Africa receives the William Webb Ellis Trophy from Nelson Mandela in 1995.

Following Nelson Mandela’s passing last week Zane Kirchner made a promise to “read up a bit more and understand what everything was about.”

But inherently he gets it.

Leinster’s newest foreign recruit, having played 28 times with the Springbok emblem on his chest, knows how much South Africa has evolved in his lifetime.

Born in 1984, Kirchner was five years old when Mandela was released from prison.

“Over time you get to know what everything was about so I think as an individual, for who he was, and the legacy he left behind and the impact he had on the country and individuals was something special.

“Going forward in life, all the opportunities that were made possible by him to be in places and do things, I think we as a country and as individuals are so grateful for that.

“Thinking back to what things were like I can definitely say growing up there has been a lot of changes, a lot of positives for people of colour.”

Of mixed race, apartheid has never impacted on Kirchner.

As a Springbok the influence of Madiba resonates today. John Carlin - in his book Playing the Enemy: Nelson Mandela and the Game that Made a Nation, which was sanitised by Clint Eastwood’s 2009 Hollywood film Invictus - wrote about Mandela teaching himself Afrikaans and becoming a rugby expert in order to converse and eventually charm his prison guards and the warden on Robben Island and other prisons.

“He has given us a chance and he has given us a step into a place we weren’t allowed to go before,” said Kirchner. “Even retaining the Springbok emblem, he understood what everything was about and still he gave us level ground to compete.

“Whereas other guys, previously, before I was born, there were a lot of good rugby players back in South Africa but I don’t think everybody got the same chances as we are being given at the moment.”

Mandela handing the William Webb Ellis trophy to Francois Pienaar after the 1995 world cup final was the iconic moment when rugby united a nation.

“He understood that rugby was a white man’s sport and to make us all part of the whole thing, not just of rugby, but as a country as a whole. He understood. He had the vision, so many years ago, to let the whole thing play out the way it did and that is something that is going to go on for centuries.”