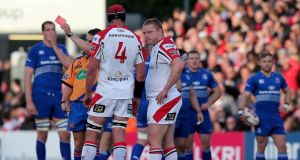 Referee Luke Pearce kept control of the decision and did his job correctly in sending off Tom Court against Leinster. Photograph: Dan Sheridan/Inpho

The next challenge for the Pro 12 is to eradicate the sloppy officiating that has become all too evident in recent months.

Referees are not the problem, mind. It’s the position they are being put into.

The Irish dominance of the league, while it looks great, has not been of genuine benefit to Leinster, Munster, Ulster, or even Connacht, when it comes to the bigger picture.

From an IRFU perspective that will always mean the advancement of the national team.

Glasgow have been a serious proposition for the past two seasons, but Leinster, without 14 internationals for large chunks of the campaign, are going to finish top of the pile, while a barely interested Welsh trio never really threatened to make the play-offs.

More competitive
From next season, with teams knowing that finishing positions matter to qualify for Europe, it becomes a more competitive league. Every bonus point will be vital, ensuring every game is as important as the next. Even when a side is well beaten they know that to limp out of places like Parc Y Scarlets or Scotstoun with a losing bonus could prove of enormous benefit further down the line.

This makes the standard of officiating more important than ever. It puts a huge emphasis on the Pro 12 to reassess its structures and resources when it comes to those who make the vital on-field decisions.

That means ensuring a big screen in every stadium and readdressing the cobbling together of a travelling referee with local assistants and tel- evision match official (TMO).

On too many occasions this season the referee has been handicapped by the lack of technological assistance – a terrible indictment of the league. You know there’s a major problem when the home team are giggling in delight, while viewers watching on television can see the blatant inaccuracy of a decision foisted upon an unsighted referee.

Lost in ether
Rob Penney made the most telling comment this season when he revealed non-Irish referees informed him that his post-match written critiques of their performance were never relayed to them. They got lost in the ether, was how Penney explained it.

This is the charge levelled directly at the Pro 12 top brass. There is no central body overseeing officials in the league. It gets sorted and reviewed by the individual unions, with Owen Doyle ensuring a tight ship in Ireland.

The worrying list of errors in recent weeks was down to the TMO allied with poor lines of communication.

On March 1st the Scarlets beat Munster 18-13 in Llanelli with Irish referee Dudley Philips in charge. Munster weren’t helped by a number of TMO (Tim Hayes) and touch judge calls by Welsh officials. Especially the suggestion that Duncan Williams knocked on from the base of a ruck just before Gerhard van den Heever got over in the corner.

The try was disallowed. In fact the second half lasted 56 minutes as Philips went up to Hayes on several occasions. “No try,” was the response every time.

There was another incident in that game when the touch judge flagged BJ Botha for a stiff arm, yet a Scarlets player escaped similar censure.

On April 18th Glasgow beat Ulster 27-9 after John Lacey turned to Scottish TMO Jim Yuille on whether Mark Bennett correctly grounded his 67th minute try. Lacey didn’t have the benefit of a big screen so he was placing his trust in Yuille to make the correct call.

The “try” would have been a decent touchdown celebration in the NFL. Even Glasgow coach Gregor Townsend was unable to suppress a smile as everyone watching at home could see the player didn’t have control of the grounding.

That incident transported us back to a time when rugby was an amateur game and home town calls were just the way it went sometimes.

Ulster lost convincingly that night but those seven points killed matters off. Stranger things have happened than Ulster retrieving an 11-point deficit in 13 minutes. That would have meant an eightpoint swing, which would have left the teams level on 70 points in second and third place in the current Pro 12 standings. Ulster’s greater points difference would have got them a home semi-final rather than a trip to the RDS. On such calls can a season be defined.

Out of equation
Basically, in both cases, the referees were taken out of the equation. The best referees strive to ensure that does not happen. Steve Walsh, like him or loathe him he’s a good ref, and Nigel Owens have on many occasions manipulated the new big screen rules to the benefit of common sense by trusting their eyesight and not allowing a TMO cloud their judgement.

They see foul play or a scoring motion on replay and go with their gut instinct.

I spoke to Owens about this recently and he said that if he is to do his job correctly, he needs to be able to retain control of a decision.

In Ravenhill last Friday, referee Luke Pearce did just that when sending off Tom Court. Granted, he gave the TMO, Munster referee Dermot Molony, the opportunity to overrule him with regards to Devin Toner being driven on his “neck” or “chest.”

If the TMO said chest, then Pearce would have reduced the sanction from red to yellow but the TMO agreed it was “neck.” So Court departed the Ravenhill field for the last time as an Ulster player. Tough call but the right call.

A weaker referee would have taken one of the two subsequent opportunities to level the playing field, and soothe the angry home supporters, by sending off either Rob Kearney or Rhys Ruddock.

Pearce trusted his gut and sin-binned both players. But he cut a very lonely figure in those crucial decision-making moments. At least the young English referee has been blooded for the road ahead (no better experience than an Irish derby).

The ideal scenario would be for the referee to have an established working relationship with the assistants who join him in the heat of battle. Maybe rotate the trio on a weekly basis. The touch judges should also join him in conclave, like American sports do, when reviewing replays.

More relevant
The Pro 12 will be dragged onto a greater plain of relevance next season so they must continue to be progressive. With it becoming a genuinely important league, what a shame it would be if we have a repeat of a Mark Bennett being forced to celebrate a try he knows he didn’t score; or worse, foul play going unpunished.

If they can squeeze it into their financial constraints – a new title sponsor has yet to be unearthed – they should create teams of officials to cover matches and make them answerable to a central referees body – like the English Premiership and Sanzar do it. Or they can accept mediocrity and plough on with the current messy situation.

Human error is unavoidable and players can accept that, but decisions by the officials will have a greater impact on the revenue of each team. There are only 20 spots in Europe now, as the French and English got what they demanded. That makes it incumbent on the organisers to eradicate obvious flaws in the system.