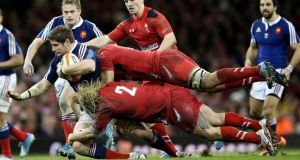 Wales achieved a third successive championship victory over France for the first time in 42 years and in doing so revived their prospects of securing a hat-trick of titles in consecutive years. Twickenham is their next stop when they are unlikely to meet opponents as wooden, fragmented and underwhelming as Les Bleus were on a night they lost their unbeaten record.

Wales showed the authority and resolution at forward they had lacked in Ireland two weeks before, but other than some awkward moments in the scrum, they were not challenged tactically by France who, on this wretched showing, will do well to win in Scotland next time out.

Wales had to withdraw their experienced second row Alun Wyn Jones a few hours before the kick-off because of a foot infection. He was replaced by Jake Ball, born in England and raised in Australia, who was making his first Test start having come off the bench against Ireland in the previous round.

France had won their opening two matches, both in Paris, but they found themselves 11 points behind after 10 minutes. They gave away a sloppy penalty after 90 seconds by being offside when chasing a box-kick, and then committed an even more egregious error moments later after Wales had launched a ritual move from a line-out.

Jamie Roberts charged into the France midfield and, when the ball was recycled, Liam Williams chipped towards the line, but the kick looked to have slightly too much weight on it. As the full-back Brice Dulin tried to collect the ball, he received a slight nudge in the back from George North but was put off more by Wesley Fofana appearing in front of him. The ball went loose and all North had to do was pick up and score, the video referee deciding that the tap on the back was not enough to explain Dulin’s blemish.

The mistake neatly summed up France in the opening period: faced with a team infused with collective intent after being outplayed in Dublin in the previous round, Les Bleus were as shapeless as they were clueless.

They kept giving static forwards slow passes, which meant the gainline was not threatened, and too often they looked as if they were a side that had been thrown together in a hurry rather than one that had been assembled for a month. Instead of leading by example, their captain Pascal Papé gave Leigh Halfpenny the opportunity to kick his second penalty from just inside the France half by trying to kick the ball out of the hands of the scrum-half Rhys Webb at a ruck.

Webb, who was brought in for Mike Phillips, injected dynamism into Wales’s attacks, passing with alacrity, but the home side did not deviate from their accustomed hard and straight running. It was only in the scrum where France enjoyed a measure of superiority: Jean-Marc Doussain kicked two first-half penalties and missed another after France won decisions in the set-piece, while the wing Yoann Huget had a try ruled out because Papé had knocked-on in the act of tackling and dispossessing Rhys Priestland.

Wales led 20-6 at the interval with Halfpenny kicking three more penalties, the first after Nicolas Mas had collapsed a scrum and the other two for breakdown offences. They were on the road to redemption against what were very ordinary opposition.

France changed scrum-halves at the break, but Maxime Machenaud did not take over from Doussain as the goal-kicker as well. It was left to the outside-half Jules Plisson, the one player on the night who gave off a hint of subtlety, to miss their next penalty, hooking his effort from 40 metres from virtually in front of the posts after Adam Jones had dropped a scrum.

The scrum was a caricature of the match with its constant downward trajectory. The ball only emerged once in the opening hour, and that was when Wales took one against the head. The referee Alain Rolland, as he had done when Wales played South Africa last November, lost patience with the front rows and sent Mas and Gethin Jenkins to the sin-bin on 50 minutes after yet another collapse of the scrum.

France were then putting Wales under pressure for the first time but, other than Bastareaud being held up close to the line, they threatened without being threatening. Fofana wasted an opportunity after cutting the defence following a forward pass from his midfield colleague. Wales’s attacks were by now sporadic, but they had the next opportunity to score only for Halfpenny to miss a long-range penalty when Sam Warburton forced Hugo Bonneval to hold on after a tackle.

Wales killed the contest 17 minutes from time after the No 8 Louis Picamoles had been sent to the sin-bin for killing the ball. Wales kicked the line-out to touch, Roberts went on his trademark rampage through the middle and, although he seemed to have held on under pressure from Wenceslas Lauret, the supporting Warburton stretched out for the line one-handed and just reached it. France gave a few more huffs, but they had long been blown away.