The Blossoms dare to dream of a win over Scotland 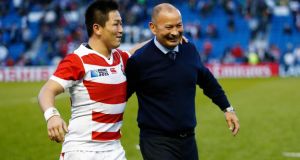 Japan celebrated their victory over South Africa with a dip on Brighton beach, the seafront cold and inhospitable in the autumnal chill, rain tumbling heavily from slate grey skies.

“The Brave Blossoms” in more ways than one, a nickname that seems appropriate when considering the context of their win against Springboks and the fact that a mere four days later they travel to take on Scotland in Kingsholm.

It’s a ludicrous schedule but there’s no carping in the Japanese camp. Head coach Eddie Jones told anyone who’d listen prior to the tournament that their goal was to “beat a top team and reach the quarter-finals,” and that “they’d been preparing to beat South Africa for three years”.

The non-believers – basically everyone outside Japan’s playing and management group – listened more attentively during yesterday’s press conference in a modest Brighton hotel room, thronged with camera crews and journalists from around the globe, when Jones asserted: “We’ve got the most important game of the tournament against Scotland. As you know we’ve only had a short turnaround which we’re well used to so we’re going to be well-prepared for the game. We’ve dress-rehearsed this probably three times over the last two years. These guys can do it. Japanese players are enormously resilient.”

He was happy to offer specifics to support his argument, pointing to three matches that Japan played in a seven-day period against Wales, Canada and the USA: Japan are no accidental tourists, stumbling into a rugby tournament.

They have prepared assiduously away from the spotlight but they cannot longer avoid the glare; Saturday’s victory ensured that. They seemed faintly bemused and a little embarrassed judging by some facial expressions as they filed by a significant number of staff, lined up to clap them out as they left the Hilton Brighton Metropole hotel for a new base in Cheltenham.

There’s an interesting sidebar to Wednesday’s game, a topic that was raised specifically with the Scotland match in mind. Jones addressed remarks made by Scotland coach Vern Cotter prior to the tournament in which the New Zealander suggested that Japan would throw their game against South Africa to concentrate on beating the Scots.

He later continued: “We can’t go to a World Cup and not play our best team. We don’t have the luxury. To suggest that, that we would go out against South Africa and not give our best . . . well, it’s unusual thinking.”

He pointed out that the Scots, over their last 15 matches, struggle to win a match if they fail to take the lead early and suggested that “if we are in the game in the first 30 minutes, I reckon we will win it”.

“If the players can’t get excited after Saturday I don’t know what’s going to excite them. They’re excited, so I don’t have to worry in that regard. Motivation is not an issue. We haven’t come here for one splash in the pond.”

Sitting alongside Jones, Japan’s captain, Michael Leitch, reinforced the message. “One of the hardest things in rugby is consistency, so as long as we don’t get too complacent and work hard who knows what can happen. We don’t want it to be a one-game wonder.

“Japanese people get really nervous and sometimes they can fold or choke so we addressed everything that could possibly happen on a game day, fixed all the problems we could think of.”

Rugby on the news

Jones opted to make six changes and two positional switches for the Scottish match in an acknowledgement of form and fatigue. “The changes to the (numbers) one and three, they’ve got fresher legs. Scotland are going to maul and high-punt (Garryowens).

“It’s probably not going to be a pretty game so we have to make sure to front them physically in the set pieces. If we do that we’re going to put ourselves in the game.”