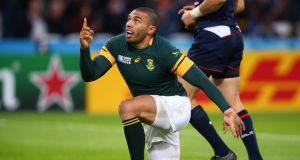 Habana on one Springbok wing, Lwazi Mvovo, a 10.23 second 100-metre man, on the other. There are few players they can’t burn.

In the end the match came simply, not easily, to South Africa, eight second-half tries against USA, Habana’s first of a hat-trick beginning the binge and Mvovo ending it in injury-time.

From the outside there was never a crisis, or if there was it had been averted. But the Springbok approach coming into the final pool game was cold focus and fearful. Where Habana and the team had come from to get to the quarter-finals had, for the ’Boks, an unusual narrative.

“After that Japan game, there were some doubts,” says Habana. “But I don’t think, as a team, we stopped believing in ourselves. It’s been a massive three weeks for us, some massive lows and unbelievable highs.”

Samoa then rocked up and broke the jaw of the 34-year-old former Munster player and Springbok centre Jean De Villiers. The injury sent him out of the tournament and into retirement. South Africa had lost its captain.

“A terrible start. Coming off a solid pre-season we were confident going into that game,” says Habana. “Losing our captain as well was tough with Jean’s history of four World Cups. Very sad.

“The loss to Japan forced us to come together. There was a lot of criticism around the Springboks and expectancy to win. At times a victory is often not good enough either . . . a dark time, a lot of pressure on the side. But we’ve pulled together and came back fighting although I don’t think anything has been achieved yet.”

The Toulon star has a sharp sense of where rugby sits in South African culture and his own history, which is, in part, why the pool stages were so fraught. Now 32 years old, the 1995 World Cup triggered his interest in the game.

The he was just an excited 12-year-old drunk on the atmosphere and travelling to games from Johannesburg with his parents and brother. But the dices fell his way and he was part of it when the game rose above sport.

“In 1995, we drove down from Jo’burg to Cape Town for the opening game in Newlands for South Africa playing the World Champions,” he says. “I was fortunate enough to go to the quarter-finals when Chester Williams scored his scores (four tries). As a family we went down to watch that rain drenched semi-final against the French. There was a try in that last two minutes.

“Then I was one of the fortunate in that 60-odd thousand in Ellis Parks when Joel Stransky kicked that goal over, when Nelson Mandela walked up there with the number six Springbok jersey on his back and handed Francois Pienaar that World Cup.

“For me an inspirational moment that made me want to pick up the game of rugby. I never played it before 1995 and in that World Cup to see a guy like Jonah Lomu demolishing England all by himself and how he went on the become a global superstar, I’ll never forget it.”

Now Habana and Lomu sit side by side with a record 15 World Cup tries each. The hat-trick also drew him level with David Campese, both of them on 64 Test tries, the highest for a player in a tier one nation.

“Humbled,” is the word he uses. All of the squad are as they look towards Wales or Australia, knowing the hurt of failure but alive to the possibility of winning the tournament.