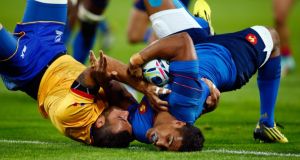 Wesley Fofana twists to score France’s fourth try during their 38-11 win over Romania at the Olympic Stadium. Photograph: Getty

As a spectacle the game was soporific, riddled with errors and limited to irregular bursts of decent fare. France scrambled their way to five tries and a bonus point but there was precious little for Philippe Saint-André to enthuse about.

He made 13 changes for this match and the team played like a collection of individuals, muddled in a great deal of what they tried to do. The backs ran laterally for virtually the entire game as Romania backed off defensively, the handling was shocking, the breakdown a source of embarrassment given the number of turnovers and the scrum wobbly at times.

France’s lineout maul caused Romania huge trouble and it’s an area that Ireland coach Joe Schmidt will focus on come Sunday. He’ll also have noticed that the Romanians drift hard in the backs and that there is buckets of room inside, that they are slow to realign when the ball is switched against the grain and that they can be porous on the fringes.

That’s not to denigrate a character-laden display from the Romanian team but the fact that there were in the match so long is also a reflection of the French tactics.

French coach Saint-André was incandescent in the dressing room at half-time, kicking over bottles, screaming and gesticulating wildly; his anger both justified and understandable.

There was no integrity to France’s work-rate at the breakdown and for a large tranche of the first half they were down numbers in this area with too many forwards happy to loiter in midfield.

Romania got some traction is this aspect of the game, forcing eight turnovers, because they were aggressive in their rucking and with superior numbers, often got in on over the tackled French player and isolated him from his teammates: at worst the French were lazy and unfocused, at best careless.

Romania had very little to recommend their back-play, long looping passes or players running hard, straight and seeking contact, so they often reverted to sliding grubber kicks in behind the advancing French tacklers. It got them some territory but for the most part was simply a case of handing possession back to their opponents.

The one exception was a hard chase by centre Florin Vlaicu who collared French Brice Dulin, and the French fullback was penalised for not releasing the ball. Romania kicked to the corner, won the lineout and after several trundles later, Vlaicu was held up over the line.

Wesley Fofana was miles offside and should have received a yellow card, something that Jaco Peyper had no problem doing about a minute later when Romanian tighthead prop Paulica Ion was adjudged to have brought down an excellent French maul on an express route to the try line. There was no consistency between the two decisions.

In Ion’s absence, France scored two tries from flanker Yannick Nyanga and right wing Sofiane Guitone, both converted brilliantly from the touchline by Morgan Parra, who had earlier landed a penalty. Vlaicu’s brace of penalties meant that Romania trailed 17-6 at the interval.

The first 20-minutes the crowd of 50,626 were busying themselves with a third Mexican wave; the first airing had been after just 13 minutes of the match. Neither side played with much attacking clarity as basic mistakes continued to pepper the respective displays.

Just as they had done in the first half France struck with two tries in three minutes, a second for Guitone and a fine individual effort from Wesley Fofana, who ended up with being voted man of the match. It wouldn’t have been a long list of contenders.

The loudest cheer of the evening was reserved for Romanian flanker Valentin Ursache who clutched the ball as his fellow forwards drove him over from a cleverly constructed and powerful lineout maul from 12 metres. Gael Fickou’s late try, France’s fifth, was a footnote, the game had become ragged with the large influx of replacements.

Saint-André’s halftime excoriation of his side had an effect, but while France were better, there were still too many errors in their performance. The back play was lateral, except for the final 10-minutes when Romania were understandably a little leg weary and couldn’t cover all the gaps.

A second string French side and a second-rate performance. France have so much quality but they didn’t represent that here and it’ll be interesting to see who outside of two try hero, Guitone, Parra, Fofana and first choice pair Louis Picamoles and Noa Nakaitaci will push through when they head for Cardiff and a date with Ireland.

Romania were gallant and gutsy but limited outside of a decent lineout maul, a strong scrum and some muscular sallies around the fringes of rucks, they are limited. Ireland will be working hard to reinforce that on Sunday.