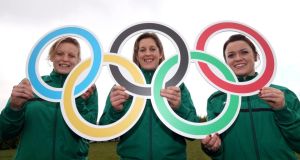 The IRFU confirmed an investment of over ¤3 million in a long-term development programme aimed at achieving qualification of the Ireland's women's sevens team for the 2016 Rio Olympics. Pictured above are Claire Molloy, Alison Miller and Lynne Cantwell. Photograph: Dan Sheridan

The Ireland Women Sevens squad have secured silverware on their first ever foray to the Hong Kong Sevens even, winning the Bowl final against an International Selection 28-0.

Ireland kicked off the day against South Africa and were leading right up to the last seconds. A late score saw the South Africans edge the game 17-14.

Ireland's second game was against France and with a little fatigue creeping in - seven of the squad were in Milan last Sunday for the Grand Slam; the girls in green went down 17-9.

Next up was a play-off against the host team Hong Kong and with spirits revived and despite the day heating up they progressed on a scoreline of 33-5.

The Bowl final, against an International Selection, was played in the high heat of the afternoon - very different from the rain and cold in Milan last weekend.

Tries from Jenny Murphy and Lynne Cantwell and two conversions from Claire Keohane saw the Irish team race into a 14 - 0 lead by half-time.

Alison Miller added to her impressive try-scoring haul with the 15-a-side team, early in the second half, and Keohane again converted.

Then to put the icing on the cake Keohane got in for a fourth try and added the conversion to give Ireland a 28-0 win and silverware on their visit to Hong Kong.

Speaking after the game, Ireland captain Jeannette Feighery said: "This is a good start for us. We have a benchmark now to measure ourselves against. We have a lot of work to do before China next week but we are pleased to win the Bowl final."

As preparations towards Rugby World Cup Sevens 2013 continue, the first live streaming from the series will make the matches available online for Rugby fans all over the world, from wsws.irb.com.

Web users will be able to watch the 12 sides from all over the globe competing at the Guangzhou University Town Stadium, including the six core teams: Australia, Canada, England, Netherlands, New Zealand and USA.

The event will see Ireland , Fiji and Tunisia make their series debuts, ahead of their participation in the Rugby World Cup Sevens in Moscow on June 28th-30th.

Tournament hosts China, alongside Japan and South America qualifiers Brazil, make up the 12 teams in what is a landmark event for Rugby in China.

Having won the opening round of the series in Dubai, and then finishing fourth in Houston, New Zealand's women lead the series at the halfway stage. Sean Horan's side heads pool A and faces another core team, the Netherlands, as well as South American champions Brazil and African qualifiers, Tunisia.

Aside from the kiwis, Australia are the only side to have reached both semi-final rounds this season and they head Pool B, which also features seventh-ranked Canada, Japan and Ireland. Pool C is made up of England, USA, China and Fiji.