Folau a jewel waiting to shine for Australia 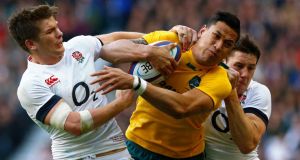 At 24-years-old and already big enough to have his way in an international game where most others spend a career just to breath the air, Folau sits sloping down his chair, the Tongan tats swirling around his arm and across his biceps. His black hair has the hint of a quiff.

Today he is in praising mood. Brian O’Driscoll is an Irish threat he says. Not very revealing, nor you suspect a name he came up with after a meticulous trawl of all the Irish players. Defaulting to O’Driscoll has been done before. Folau, though, is respectfully answering questions.

“Obviously playing in the backline they’ve got O’Driscoll. With his experience, he’s a big part of the team and that,” he says. “He has a crack and that’s something his team-mates really admire about him. So it’s going to be the same on Saturday. We’ve just got to try and contain him and be ready to play.

“We’ve obviously done a lot of work,” adds Folau. “We’re not going to take their boys lightly, so obviously it’s going to be a pretty tough game. There’s a new coach but we can’t get drawn into thinking that’s a factor. We have to prepare well going into the game and be ready to go.”

Deserting Australian Rules football and then, contrary to expectations, not returning to Rugby League, where he scored 73 tries in 90 games but moving to rugby union, has clouded Folau’s swashbuckling career. Variously described as a cash hungry mercenary and a freakish talent, the closest comparison has been to New Zealand’s Sonny Bill Williams.

The only difference there is that Williams’ third professional sport was boxing, not Aussie Rules. Last summer was Folau’s debut Test match in Union for Australia. Last week was his first time playing in Turin. This weekend is his first outing against Ireland in either rugby code.

Maybe there is enough inexperience there to stop the swooning. Maybe there is but he did score twice against the Lions on his Test debut, the second a scenic route around three defenders.

“Obviously it was my first time in Italy to play. The crowd was pretty special and kind of similar to the Argentina atmosphere,” he says. “But in terms of the footy I’m feeling a lot more comfortable in every game that I play. That was the case at the weekend (Italy) and I’ll just build on top of that. Certainly guys around the park are helping me a lot during the training week and then just going on to the games I’m beginning to feel my way in and just being confident.”

Inexperience
Folau embodies the cutting verve any schoolboy would imagine if he had to pin a name to a dream. But where his inexperience may be perceived as a weakness, so too is he a new package to the Irish players.

The Lions from the summer tour aside no one in the Irish squad has seen him play in the flesh. And he does have a curious way of moving, not just ripping pace but deceptive body angles that can set a defence. Folau is a new threat and depending how the next few years unfold on the wing or at fullback, he may also be just an ephemeral presence.

“Maybe in some ways,” he says of his recent arrival being an advantage. “It helps playing new teams. But they will watch their video footage on different players. Everyone does their homework. I’m the same. I don’t know too much about the players but I can certainly do my homework. I go into the game ready to play.

“Obviously it’s my first year in rugby and I’m really enjoying the experience. I feel like this is kind of home now and I’m trying to build on what I’m doing here and finish the year strongly. I’ve signed on for another two years and that’s all I’m thinking of at this stage.”

Five months into rugby union and counting. Not often is meteoric an understatement.