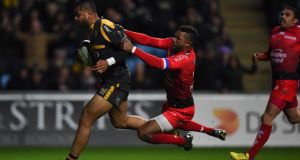 Fiji-born Nathan Hughes again showed what England will gain when he qualifies through residency in June, his two tries capping a fine evening’s work. Ruaridh Jackson and Frank Halai claimed the other tries as Wasps inflicted Toulon’s fifth defeat of the season in all competitions.

Wasps eased to the top of Pool Five with their second European win in as many weeks, following their 33-6 triumph at Leinster.

Toulon’s defeat proved a frustrating opening to their campaign, the reigning European champions still yet to find their groove this term.

The Cote d’Azur club are yet to discover when their first-round clash with Bath will be rescheduled, the Stade Mayol encounter postponed after the terrorist attacks in Paris.

Wasps refused to allow their visitors to ease themselves into the competition, completely dominating the lacklustre French side under the watchful eye of former England boss Stuart Lancaster.

Wasps’ last European glories date back to 2007 and 2004, but after a protracted period of financial insecurity the future again looks rosy. Director of rugby Young’s steady squad building, coupled with the Ricoh Arena move, have set Wasps back on the right path. Now the Coventry-based club have secured the chance to fight for another knock-out phase battle.

Toulon dispatched Wasps 32-18 in last season’s quarter-finals, but this time the French giants could hardly force anything their own way. Jonathan Pelissie failed with an early penalty, compounding a frustrating start for Toulon, with Bryan Habana stumbling after forcing a fine intercept.

No sooner had Wasps stunned the visitors than they repeated that feat, Jackson’s chip recovered expertly and just as adeptly offloaded to James Gaskell. The rangy lock had the wit to find the onrushing Jackson, who proved the merits of chasing your own kick, to ghost under the posts for Wasps’ second try. Jackson’s conversion set Wasps 14-0 to the good, before Pelissie and Daly traded penalties.

Daly landed one of two long-range penalty shots, before Jackson traded another goal with Pelissie. That goal-kicking flurry still left Wasps leading 20-6 at the break, those two tries remaining telling at the interval.

The hosts plundered a third score quickly after the restart, Charles Piutau racing through the line before sending Halai under the posts.

Toulon unloaded their potent bench in response, only for Dai Young’s side to deny the visitors through two vital turnovers in their own 22. After soaking up the pressure Wasps forced the issue once again, Jackson punting a kickable penalty to the corner. Hughes then rewarded Wasps’ ambition by driving over for his second score from the obligatory rolling maul.