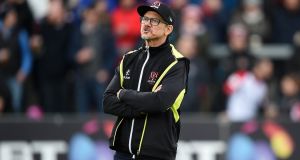 Ulster coach Les Kiss: “Our defensive line shrank in a bit and that gave them space on the edge that put us on the back foot. Defensively we can definitely improve.” Photograph: Getty Images

The context of the victory reveals the magnitude of the achievement. Ulster were missing half a dozen frontline players through injury, the majority internationals, for the most important Champions Cup fixture of the campaign against a Clermont Auvergne side sitting atop the French Top 14.

Ulster coach Les Kiss had to trade on the versatility of players from a position perspective, principally the one placing Robbie Diack in the secondrow, from where he contributed handsomely before retiring at half-time. Whether the shuffling was minor or major from an individual context, players knuckled down to the task.

There were other hurdles to negotiate that surfaced within the 80-minutes. The home side’s work on the kick-off and restarts was initially poor, coughing up possession carelessly and allowing Clermont a beachhead in Ulster territory from which to launch their attacks; the tariff was 10 points early on.

Defence was another shortcoming, particularly in the first half and the last 10 minutes of the match. The spacing in the line was an issue initially, too wide at times that afforded the outstanding Wesley Fofana freedom that he luxuriated in and then, too narrow, which facilitated the visitors getting outside to the freedom of the touchline channels.

Clermont won the collisions and the net outcome was always likely to be tries. Tired minds and limbs were undoubtedly a factor as indiscipline saw the penalty count spike sharply.

Kiss admitted: “From a performance perspective, (there were) a lot of good things (and that Includes) the outcome. Parts of the process were a little bit disappointing; we let (Wesley) Fofana have too much room in that first half. A couple of missed tackles on (Peceli) Yato gave them momentum. I thought that was disappointing.

“In the second had we addressed it; I think we came out and turned up a lot better in that area. It was pleasing to say the least. Look the last 20 minutes I wouldn’t have agreed with all of Wayne’s (Barnes) decisions in the penalties but that is what it is. We just weren’t good enough to stem that (flow).

“That’s why we are disappointed. The two points keeps them in control of the pool and we are going over to a cauldron that is very difficult to win in, in any circumstances.

“We gave them a bit of a gain-line, space to play and they were thriving. Our defensive line shrank in a bit and that gave them space on the edge that put us on the back foot. Defensively we can definitely improve.”

There were some monumental individual contributions with man-of-the-match Iain Henderson in the van. Seán Reidy had a phenomenal game, carrying and harrying, Chris Henry, demonstrating the limpet-like adhesion at the breakdown.

Kiss acknowledged the work of his backrow: “I thought they were awesome. They really made them scrap for everything and kept the momentum we needed to in attack.”

Ruan Pienaar provided the team with elegant direction going forward, a highpoint literally and figuratively, his crosskick that saw Tommy Bowe not only brilliantly out-jump two defenders but offload on his way back to earth to the supporting Henderson, who touched down.

Paddy Jackson oozed class, the range and nuance of his passing conspicuous in Luke Marshall’s first try, and it complemented his sound judgment in assessing and executing options.

Nowhere was this more apparent than his superb individual try: the grubber kick was perceptive, the control with the second touch precise, topped off the patience he displayed in regathering the ball over the line. Luke Marshall chipped in with a brace of tries as he excelled too, while Charles Piutau is sometimes unplayable, his footwork a real joy to watch.

Stuart McCloskey engineered some great gain-lines for his team and his offloading was precise; he had a leading role in several of the tries. Rory Best led the team in every respect and extracted a response from most.

Clermont bookended the match with tries and will wonder how they lost this match. The answer is a little carelessness in possession at times and the porous quality of their defence, something that Kiss had identified beforehand.

For next Sunday’s Repechage at the Stade Marcel Michelin, Ulster may have Franco van der Merwe and Roger Wilson but Andrew Trimble, Craig Gilroy and Stuart Olding are rated no better than 50/50. The final leg of the ascent to the summit of the pool ahead of the Christmas break in Europe is ridiculously steep.

Kiss admitted: “The truth is they are in charge of it (the pool) still. We have to shift some of our focus in our game plan to make sure we can get the leverage where we think we can. Overall it certainly has put a different colour on the pool, but it is only part of a job done.”