Ulster allow Leicester too much of a headstart 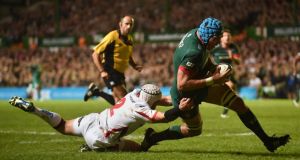 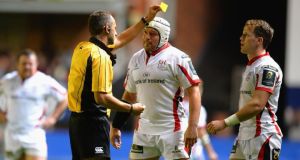 Ulster left themselves a mountain to climb at Welford Road and ultimately fell short against Leicester Tigers, who put indifferent domestic form behind them to get their European Rugby Champions Cup campaign off to a winning start.

Ulster got out of there with a losing bonus point but after a sloppy first half and dominant second they will feel there was more there for the taking.

“Not a solid platform for us,” admitted Neil Doak afterwards. “We let Leicester into the game from the first minute, they got on the scoreboard and after that we didn’t compose ourselves.

Of their uncharacteristically vulnerable setpiece plays, he admitted: “There were a few handling errors”, but added: “We had a couple of chances, we got back in the game well, and with a little bit of luck we might have got won it.”

First-half tries by centre Owen Williams, lock Graham Kitchener and outhalf Freddie Burns put Ulster firmly on the back foot, and not even England centre Manu Tuilagi’s 15th-minute departure after he appeared to suffer a head knock could disrupt Leicester.

Ulster, despite Ireland wing Tommy Bowe’s scorching second-half try and a later Franco van der Merwe touchdown, plus eight points from the boot of outhalf Paddy Jackson, could never quite get close enough as two Williams penalties and a conversion and one Burns conversion, meant Leicester prevailed.

Although Jackson drifted an early penalty chance wide, Ulster made a confident start, moving through numerous phases as they utilised the battering ram of instincts of number eight Nick Williams before Jackson found his range after eight minutes to secure a 3-0 lead.

Leicester saw Tuilagi leave the action just seven minutes later, but they responded by launching a concerted attack that resulted in Williams just getting underneath last-ditch tackling to claim a try that required confirmation from television match official Bernard Dal Maso.

Burns kicked the conversion to put Leicester 7-3 ahead, while Tuilagi going off meant Miles Benjamin replacing him and Vereniki Goneva moving from wing into midfield. It did not unsettle Leicester, though, and they added a second try 11 minutes before half-time after Ulster number nine Paul Marshall tried to break from inside his own 22 but succeeded only in seeing his pass intercepted by livewire Tigers skipper Ben Youngs.

The supporting Kitchener collected Youngs’ pass to score, and Ulster were then back behind the eight-ball after Gilroy was sin-binned by referee Romain Poite for a dangerous challenge on Benjamin before Leicester punished them ruthlessly.

Youngs was again the catalyst by wrong-footing an undermanned Ulster defence, and it was Burns who weaved his way over for a try that Williams converted to open up a 19-3 advantage.

Leicester were hungry for a fourth touchdown before the break, though, with Ulster in disarray, but despite hooker Leonardo Ghiraldini appearing to have scored, it was ruled out because Youngs had a foot on the touchline during build-up play.

The interval could not come quickly enough for Ulster, and although they managed to prevent any further defensive breaches before the break, a 44th-minute Williams penalty resumed normal service and took Tigers 19 points clear, though that was quickly matched by Jackson’s second successful strike.

Ulster looked much sharper in the second period, which was underlined when they attacked from quality lineout ball and their backs put together an exhilarating passage of play that ended with Bowe sprinting over.

Jackson’s conversion cut the gap to 22-13, only for Williams to boot another penalty.

Tigers entered the final quarter knowing the game was not won, and Ulster did not require a second invitation to pile the pressure on as Van der Merwe claimed their second try 13 minuites from time, but Jackson’s conversion attempt was successfully charged down by Leicester flanker Jamie Gibson.

Ulster, seven points adrift, went in search of more than just a losing bonus, but Leicester preserved their advantage by closing down the visitors in midfield and denying Bowe and Gilroy any further opportunities.