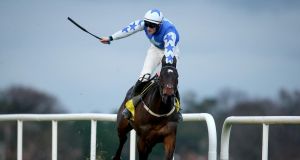 Kemboy, favourite for the Gold Cup, is owned by the Supreme Horse Racing Club.

A solicitor engaged by former members of the Supreme Horse Racing Club (SHRC) said on Thursday evening he was “very optimistic” that the 29 horses it has hitherto owned, including the top-class chaser Kemboy, will be able to race this season.

The Thurles-based Patrick Kennedy was speaking after Horse Racing Ireland (HRI) effectively kicked SHRC out of the sport by declaring it was no longer “permitted to be owners or part-owners of racehorses”.

The announcement from HRI represents the moment when its patience finally expired over the Club’s repeated failure to provide answers to its questions. Following complaints from members about alleged irregularities in the way SHRC was run, HRI got involved this summer and its concerns have not since been allayed.

An HRI statement said: “Due to the lack of engagement and failure to provide the necessary information, there is no alternative but to withdraw approval of the Club and to cancel its registrations as a recognised club.”

It added that HRI officials had met with Steve Massey, the Club’s trustee, in July and been assured the necessary paperwork would be filed.

“There was repeated correspondence in August, September and October, seeking members’ information from Supreme Horse Racing Club, which yielded no or inadequate responses,” the statement continued. It said Massey failed to show up for a meeting with HRI last week and has not since been in touch.

A group of SHRC members, represented by Kennedy, now hopes to assert ownership of the horses and the HRI statement suggested other members could approach him or engage other legal assistance, adding that it was open to accept the re-registration of the horses under new ownership structures.

However, establishing who owns how much of each horse may be a complex process, particularly if, as has been suggested, shares in one or more of them have been oversold.

“There’s a lot of work to be done here,” Kennedy said. “Obviously the welfare of the horses is paramount. I’d be very optimistic that we can get them running again this season.”

Massey did not answer calls on Thursday evening.

Kemboy, the winner of three Grade One races last winter, is the most high-profile of the SHRC horses, none of which have been allowed to be entered in races for the past month. He remains the 13-2 favourite for the Cheltenham Gold Cup in March. - Guardian