Champion athlete relives day: ‘It’s only after it’s won that you realise the immensity of it’ 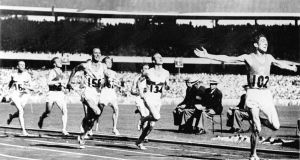 The thing about sporting records is that for all the replay buttons and digital archives at our fingertips these days, nothing can replace living memory. Especially when that memory is as sharp today as it was 60 years ago – and why no one can describe the Olympic 1,500 metres in Melbourne better than Ronnie Delany.

He sees it more clearly now, as it turns out. Aspects of the race were lost on Delany on the day, given his trance-like concentration; certain components of his performance got somewhat lost at the time. In ways it’s even more impressive now than it appeared on December 1st, 1956.

It’s late afternoon and hot inside the Melbourne Cricket Ground when the field of 12 finalists are called to their marks. The crowd of 120,000 are anticipating this as the proper blue riband event: interest in the 1,500m, the metric mile, has reached a fever-pitch zenith, and in the two years since Roger Bannister had broken the barrier of barriers – the four-minute mile – only nine other men have followed suit.

Six of those are now on their marks (Bannister, fittingly, is sitting amongst the crowd, having retired not long after his 1954 breakthrough). The youngest of them is the 21 year-old Delany, who six months previously ran 3:59.0 in Compton, California.

The favourite, and not just for the Melbourne crowd, is the 26-year-old Australian John Landy, who had lowered Bannister’s mile world record to 3:58.0. Britain has three finalists, including Brian Hewson, and while there’s a sense any one of the 12 might win, Delany is the dark horse.

“My only goal is to win. I wasn’t thinking about second, or third, or running well. After two years at Villanova University, that’s instilled into me by my coach Jumbo Elliott. The slogan in our dressing room is ‘Win, or bust’, and that’s the only philosophy I know. He’d programmed to me win.

“Naturally I’m still nervous, because I’m essentially in Melbourne on my own, no coach, no Irish team manager. Two hours before the race, I’d turn on the nerves, to get the adrenaline flowing, then about an hour before became the cold, calculated, tactician.”

The gun is fired, and into the lead goes Murray Halberg from New Zealand, also known for his front-running tactics, which four years later would win him Olympic gold over 5,000m. Landy drifts towards the back, Delany just in front of him, exactly where he wants to be.

“I have total belief in relaxation. You’re always concerned about splits, and I knew the pace was fast, about 58 seconds for the first lap. But I don’t individualise the runners. You know shapes, sizes, but I never saw them. I was never conscious of who exactly was around me. I’m concentrating on my own position, running with total relaxation, staying out of trouble.

“The important thing is the shape of the race, to be in a position to strike, make the one move, to win. That was the only tactic I knew, learnt from my first coach Jack Sweeney, back in CUS in Dublin.

At 600m, Merv Lincoln, the other Australian, sprints from last to first, and suddenly the field strings out. They hit 800m in 1:59, and Delany, briefly, gets detached.

“There’s no panic, although I shouldn’t let that happen. In my mind I always believed I could win, even though I’d only been selected very late on. I believe in destiny, but that you play your own part in it too. Like me leaving the Irish Army Cadets, at age 18, to the aghast of my father, to chase the US scholarship. And how I was able to apply myself to the training, understood the quantum I needed to do.”

Only now that destiny is put to the ultimate test. With 400m to go, all 12 runners are bunched again, and in the shocking excitement the track official forgets to ring the bell. Hewson hits the front with 350m to go, Landy in hot pursuit, Delany still back in 10th.

“Into the home stretch and I feel the strength, as if running on air. I’d done a huge amount of upper body work, press-ups, pull-ups, and there’s the sense of total control. Some people say my style isn’t the prettiest but in my head at that moment I am the most beautiful runner in the world, legs flowing so easily, breathing so consistent and effortless, my mind so relaxed and concentrated.”

With 60m to run Delany passes Hewson and wins by a distance, his 3:41.2 an Olympic record by exactly four seconds. The German Klaus Richtzenhain comes through for silver, Landy for bronze, only by then Delany is about to kneel down in a thanksgiving prayer. He’d run his last 200m in 25.6 seconds, his last 100m in 12.9 – flying, even modern standards.

“I spread my arms crossing the line, and the funny thing is, on one of my last training sessions, in California, the American coach Brutus Hamilton actually had me practice that, stringing a piece of twine across the finish line and ensuring I ran through it. But it’s only after it’s won that you realise the immensity of it, because I hadn’t looked or thought beyond winning. There is no sense of history, in the moment, it’s just joy, elation. There’s no deeper thought than that, other than maybe a sense of disbelief, that I am about to win, then that sense of destiny, that my gift was to win the gold medal.

“And it’s never been a burden, always a joy. It’s hard to say as an 81-year-old, talking to you about something that happened 60 years ago, but the race does seem to have appreciated over time. It was some years later when Bannister wrote me a letter, describing it as one of the best tactical 1,500m races of that era, which is such a wonderful compliment. And for me the essence and the beauty and the purity of running is still there, and despite all the money and the commercialism, I do still believe in the dream of winning the Olympics.”