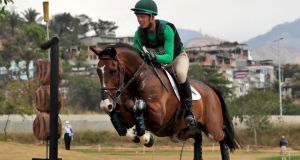 As anticipated, the course designed by Pierre Michelet of France proved a tough challenge and only three riders came home clear within the time, all of whom are in the medal positions going into Tuesday’s concluding show jumping phase.

Although he dropped down the rankings to 16th, Gloucestershire-based Jonty Evans remains the best-placed Irish rider with the Courage II gelding Cooley Rorkes Drift. Bred in Co Down by William McCarrison out of a Rachelle Comet mare, the 10-year-old was tiring visibly towards the end of the 5,840 metre track and the combination picked up 22.80 time penalties for a two-phase total of 64.60.

Evans couldn’t afford any jumping errors over the 33-fence course following the elimination following a fall of the first Irish pairing, Pádraig McCarthy on Simon Porloe, and the 40 jumping penalties plus 25.60 for time accrued by Clare Abbott with Euro Prince. Among the last group of team riders to compete, Mark Kyle picked up 20 jumping penalties when Jemilla glanced off the second of the two bush corners at 11.

Topping the leaderboard on 37.60 penalties is Australia’s Chris Burton (Santano II). He is followed by the reigning champion, Michael Jung (Sam) of Germany, who is on 40.90, with French rider Nicolas Astier, who was second out on the course, lying third with Piaf de b’Neville (42).

New Zealand’s Mark Todd, the oldest rider in the field at 60 and coach to the fifth-placed Brazilian team, picked up two time penalties to slot into fourth with Leonidas II. He is a place in front of the USA’s Phillip Dutton on the Irish Sport Horse Mighty Nice (46.80), a 12-year-old Ard Ohio gelding which competed here as Over The Vee and was bred in Co Cavan by William Kells.

On a total of 150.30, the Australians hold a narrow lead over their neighbours New Zealand (154.80), who have just three riders remaining in the competition, with France in third (161) ahead of the reigning champions Germany (172.80) who, too, are down to just three riders.

Early on Tuesday morning, those horses still in the competition will be inspected for a second time by the ground jury of the USA’s Marilyn Payne (president), New Zealand’s Andrew Bennie and Sandy Phillips of Britain to see if they are fit to continue.

Ireland needs all three horses – Cooley Rorkes Drift, Jemilla and Euro Prince – to pass if their riders are to continue as a team. After this, the team medals will be decided in the first round of show jumping which, starting at 2pm Irish time, will be conducted in reverse order of merit.

The top 25 will then qualify for the individual final in the afternoon, again competing in reverse order of merit and with only three riders from each nation permitted to make the cut. This is due to commence at 6pm Irish time.