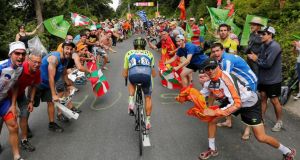 Nicolas Roche of Tinkoff-Saxo on the climb to Pla d’Adet in the Pyrenees during the 17th stage of the Tour de France yesterday. Photograph: Jean-Paul Pelissier/Reuters.

Given the strength that Alberto Contador’s lieutenants – Michael Rogers, Nicolas Roche and Rafal Majka – have shown since the Tour de France entered the Alps on Friday, it is intriguing to speculate how the duel between the Spaniard and the Tour winner apparent, Vincenzo Nibali, might have panned out had Contador not crashed out last Monday, not to mention how Team Tinkoff-Saxo would have fared had they been able to field Roman Kreuziger, the Czech who was sidelined due to a biological passport issue.

At the end of a hotly contested second stage in the Pyrenees, Majka took Tinkoff-Saxo’s third mountain stage win out of four – enjoying the support of Roche almost until the death – and forged a substantial lead in the polka-dot mountains jersey standings in the process. Considering the state of utter depression in their camp 10 days ago after Contador’s crash, it has been quite some comeback for all of them.

Majka, a 24-year-old Pole, began the stage with his eyes on reinforcing his advantage of a single point over Joaquim Rodriguez in the mountains jersey but caught and dislodged the Italian Giovanni Visconti in the final five kilometres for his second stage win of the race.

The Spaniard crossed the next two summits, the Cols de Peyresourde and Val Louron, ahead of Majka, to regain the lead, albeit only provisionally as the contest was settled on Pla d’Adet when Majka disposed of the Spaniard early on before overhauling Visconti. The Pole’s stage victory gave him maximum points at the top of the climb and his 37-point lead over Rodriguez could be decisive.

The final kilometres witnessed another show of strength from Nibali, who made a series of incisive attacks to dispose of almost all of his rivals.

The Italian confirmed that he has not yet been taken to his limit, and has been able to save strength on every stage for the following day. He was stating the obvious when he conceded he would have had a far harder ride had Froome and Contador remained in the race.

The standings behind Nibali were reshuffled again, and the main loser was Alejandro Valverde, who stuttered under pressure from Pinot six kilometres from the line, and lost a further 49sec to Nibali.

This was a brief but brutal stage, well under four hours in the saddle, but with four major climbs in the final 76km, culminating with the intimidating ascent to the finish. Guardian Service