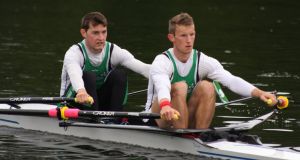 Paul O’Donovan (left) and Gary O’Donovan, who will represent Ireland at the Olympic Games in Rio. Photograph: Debbie Heaphy.

Buffeted by winds and holding out against floods, rowing steps out of an important year and into what might be the most important in a decade or more. The year 2016 holds the possibility of more boats joining the two which qualified for the Olympic Games in 2015.

And at least one may reach a final in Rio, with a shot at a medal.

From Portora in Enniskillen, through Athlone, down the Shannon and across the south of the country, the current picture is of clubs which have not been able to send out rowers since storm Desmond.

Clonmel Rowing Club is under three foot of water – “the worst in 20 years” says Jimmy Fennessey. While Graiguenamanagh has not been badly hit, the guesthouse business of club captain Brian Roberts is under four feet of water.

Castleconnell and Shannon have water in their boathouses. Carrick-on-Shannon Boat Club has had “very severe” flooding, with no use of the boats for six weeks.

“And it’s not looking good for the foreseeable, either,” said Mick O’Rourke.

Activity at the National Rowing Centre has been pulled back to indoor work, and a group of internationals head off for a camp in Spain on Thursday, January 7th. The centre itself should not flood, as it is sited above the waterline of the dam at Inniscarra.

Even as the wind howled outside, Skibbereen Rowing Club marked 150 national titles with a dinner dance on Tuesday. It was a proper celebration for a club which has managed the feat of gaining domestic success and an excellent international profile. Graphic images of that action by the photographer Debbie Heaphy will be on show at the Stairwell Gallery from January 21st until April 2nd.

Paul and Gary O’Donovan provided the Irish Times’ highlight of the year with their performances at the World Rowing Championships. The young brothers – Paul is 21, Gary turned 23 on Wednesday – were long shots to even make it through the lightweight double quarter-finals on the Wednesday. But they ousted New Zealand there and then took fifth in the B Final to prise open the door to Rio.

They are in a difficult class, but the crew was only formed for the 2015 season and their rate of progress has been stunning. The odds of this crew featuring on a podium are long: about what would have been quoted, pre-Aiguebelette, for them to qualify.

She flared into the consciousness at the start of the century, coming back from Scotland where she had learned to row to establish herself in the Ireland team.

By 2001 she was a world champion in the lightweight single, a non-Olympic class. But it was only last season – after a long break from the sport and with three children and a medical qualification – that she found a partner and a coach which allowed her to stand on the brink of achieving her dream of competing in the Olympics. The coach is soft-spoken New Zealander Don McLachlan, the crewmate Claire Lambe, who has shown steel in competing season after season when it lost her money.

Sanita Puspure in the single scull will hope to join the two lightweight doubles in Rio, while a men’s lightweight four and at least one other women’s crew are also likely to be given a shot at the Olympic Qualifier. The loss of Helen Hannigan and Lisa Dilleen to the programme weakens Ireland’s chances.

Fisa, the world governing body, has announced that the lightweight men’s eight will be removed from the World Championship line-up due to the low number or entries.