Man who ran the world will finish with Dublin Marathon

After five continents, six deserts, 41 countries and nearly 50,000km end is in sight for Tony Mangan 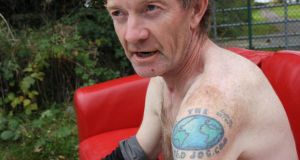 Tony Mangan enjoying a rest on his red couch 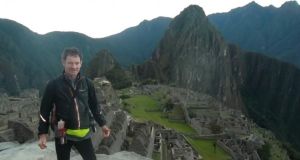 Friday afternoon, driving down the N11, trying to find the man who has run around the world. Because if Tony Mangan is for real he must be at least seen to be believed.

He can’t give me an exact time, or place. But that’s been the story of his life ever since Mangan lined up for the Dublin Marathon on October 25th, 2010, and instead of finishing at the finish line – as any sane person would do – kept on running, the days slowly turning into months and then years.

Now, five continents, six deserts, 41 countries, 1,462 days and very nearly 50,000km later, his finish line is in sight. For the last six weeks, he’s been completing his run around the world with a run around Ireland – a mere 1,620km – and this morning, he’ll line up for the 2014 Dublin Marathon, adding a final 42km. This time, when he reaches the finish line, or rather back at his starting line, Mangan will stop, bringing his total to exactly 50,000km.

A text message arrives: “At the moment, between Rathnew and Newcastle, on the old coast road.” It’s from Siobhan Clifford, his support driver for the Irish leg of his run, and at least it does narrow down Mangan’s location. Suddenly, there he is, not running but sitting on a red leather sofa, near a back entrance to Druids Glen golf resort.

He’s rarely pre-booked any accommodation, and often the generosity of complete strangers proved more than accommodating. He says he’s been living the dream since 2010, and estimates it at no more than the cost of a small SUV. That’s not saying he’s not looking forward to the finish. He’s fairly well knackered at this stage, he tells me, as we share a short 5km stretch of Friday’s run, through Kilcoole, and into Greystones.

“My body actually gave up on me about a year and a half ago,” he says. “But my mind has kept me going. That’s always been the strongest part of me. My body has been telling me to stop for a long time now. So I can’t say it’s been easy. But I’ve never once considered stopping. Because this was the monster of an idea which has haunted me for the last 20 years, and had to be exorcised. I’ve said for a long time now I’ve felt like a prisoner of this dream.”

The run has taken its toll. In pictures from 2010, he looks a youthful 53-year-old: now, at 57, Mangan looks more his age. More striking is the fact his left thigh muscle is noticeably wasted, about half the size of his right thigh.

He lists off several highs, and lows. Running through the Colorado Rockies, then down through South America, the Andes providing a constant natural high, before the calm 3,800km stillness across Australia. Later, the mayhem of India, the constant harassment and lethally dangerous traffic, before some unexpected refuge again, in Myanmar, formerly Burma, when he didn’t just run under police escort but repeatedly sang U2’s Walk On, as a sort of personal salute to Aung San Suu Kyi.

He first crossed the Equator at Cayambe, an agricultural town in the highlands of Ecuador, after about 18 months; he turned 55 in April 2012, somewhere in northern Peru, his 13th country: he turned 56 in the heart of Alice Springs, and on the day he turned 57, somewhere in Iran, he ran 57km to celebrate.

The World Runners Association (WRA) officially governs all walking and running events which involve a circumnavigation of the Earth on foot. The basic rules include starting and finishing in the same place, crossing at least four continents coast-to-coast, covering a minimum of 26,000km, with as many breaks as desired, up to a maximum of one year.

“I’ve made five trips back to Ireland, over the last four years, all for close family reasons,” Mangan tells me. There is an obvious self-determination about his effort, cemented by a sort of stubbornness of will.

He never once asked himself the obvious question either: why? Mangan didn’t start running until he was 30, although long before that, at age 21, he set off from his home in the Liberties in Dublin and cycled around the world, inspired by Dervla Murphy’s 1965 travel classic, Full Tilt: Ireland to India with a Bicycle. In all, Mangan spent 15 months on the road, finishing in 1979, promising himself, even back then, that he’d do it again someday, only this time on foot. A decade later, he had become increasingly fascinated by running ultra-long distances. In 2010, deciding it was “time to live the dream”, he took a voluntary redundancy from his job in construction and took the plunge.

Which begs the final question: what next? Mangan jokes about having a rest, maybe buying a car, definitely writing a book, although it will feel strange, wondering what to do next when for the last four years he’s had all the time in the world.