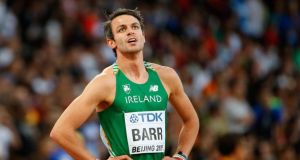 There was always going to be some element of luck needed for both Mark English and Thomas Barr if they were to make a World Championships final in their respective events, and unfortunately for them it just didn’t shine.

English ran a largely cautious yet tactically sound race, and although he finished strong, appearing to close on one of the qualifying places into the home stretch, he had to settle for fifth in 1:45.55, still his second fastest time of the season.

Victory went to one of the gold medal favourites Amel Tuka from Bosnia, who looked very comfortable with his time of 1:44.84. English ended up 11 fastest of the three semi-finals, but of course only the leading eight advanced.

“It was actually easier than the heat because I was focusing on running splits, trying to run 52 flat through 400m. So I was just off it, I tied up a small bit on that last 50. But I don’t really think, given the injury I had this season, I was going to do any more than that. These semi-finals usually go 51/52 first lap. I was trying to keep it as even as possible. I knew if I ran 1:44 I’d get through, but it wasn’t out there today.”

Barr also fell short of his ambition to become the first Irishman to reach the final of the 400m hurdles, finishing fourth in his semi-final, clocking 48.71 seconds. Drawn in the outside lane, and thereby relying largely on instinct when judging his pace against the other runners, Barr also needed to finish in the top two to be sure of qualifying.

The Kenyan Boniface Tumuti took the win in a personal best of 48.29 seconds, ahead of the American Kerron Clement (48.50), with Thomas Chalyy from Russia taking third ahead of Barr in 48.69

“I’m a little bit annoyed, because some athletes were slower than the heats, yesterday,” said Barr. “And I know if I ran close to or beyond my best, I could be in the final.

“I didn’t have as strong a kick as yesterday but I’ll take a huge amount from this World Championships. Fourth in the semi-final with my second-fastest time ever is pretty good.”

The fastest qualifier was Denis Kudryavstev from Russia, who won the second semi-final in a personal best of 48.23 seconds.

Out on the roads around Beijing earlier, Alex Wright’s appearance in the 20km walk ended in disappointment after he was disqualified.

The 24-year-old was penalised three times for losing contact with the ground and pulled from the race after 50 minutes.

Wright, a training partner of Rob Heffernan, will also go in the longer 50km race next Saturday.

“It’s disappointing,” said Wright, who recently switched allegiance from Great Britain. “I wanted to achieve top 20. I just went for it. I took a risk and it didn’t pay off.”