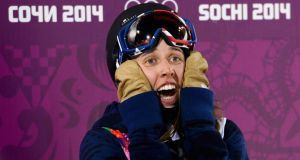 Winner Maddie Bowman of the US after the women’s freestyle skiing halfpipe finals at the 2014 Sochi Winter Olympic Games in Rosa Khutor. Photograph: Dylan Martinez/Reuters

Canadian Burke was the driving force behind getting the halfpipe into the Games but she died in a training accident two years ago. The International Olympic Committee (IOC) had forbidden the skiers from wearing heart-shaped stickers in memory of Burke but she was not forgotten.

“I grew up looking up to Sarah and watching her ski, she was a hero in my eyes and still is,” Bowman said. “Sarah had a special talent for bringing people together and I think she’d be proud.”

Bowman unleashed back-to-back 900s - two-and-a-half spins of the body - first left, then right and once it was clear she was not going to botch her landings, there was only going to be one winner. Her first-run score of 85.80 would have been enough for gold but she improved it to 89.00 at the second attempt, letting out a piercing shriek when she saw the numbers on the big screen.

The 20-year-old then faced a nervous wait while the last two skiers went down the 200-metre tube of packed snow, but they were unable to overhaul her tally.

Marie Martinod took the silver for France with the 85.40 awarded for her second run and the bronze went to Ayana Onozuka of Japan with 83.20.

Bowman’s victory gave the United States a sweep of the ski halfpipe golds at the Extreme Park and she celebrated with men’s champion David Wise in the landing area.

“I was just happy to land two runs at the Olympics, it’s pretty crazy,” Bowman said.

Burke’s parents were in the crowd and at the end of the competition the slippers, who clean the surface between runs, skied down the pipe in a heart-shaped formation.

“This is her dream manifested here,” Burke’s mother Jan Phelan told Reuters. “She worked so hard for so many years, just to advance women in the halfpipe and then to get the halfpipe into the Olympics.”

Martinod, who was persuaded by Burke to come out of retirement once the event was accepted into the Olympic fold, also made a heart shape with her fingers. The 29-year-old vindicated her friend’s faith with two clean runs but accepted that Bowman had been in a class of her own on the night.

“She has tricks I don’t, technically I’m not at the same level as Maddie,” said the 29-year-old, who celebrated with her four-year-old daughter Meli Rose on the podium. Onozuka also laid down two clean runs and got plenty of height on her jumps but paid the price for a lack of sophistication in her manoeuvres.

“I can’t believe that I have got a third place,” she said. “I didn’t do anything special for the Olympics, I treated it as just another competition.”

The dangers of the event were clear with six of the 11 finalists falling at least once as they pushed their routines to the limit in the bid for medals. Martinod’s compatriot Anais Caradeux had been withdrawn from the final by the French team after blacking out when she landed heavily on her head in her second run in qualifying.

“This is crap,” said the 23-year-old. “I’ve been working for 10 years to get in such a situation, but I’m still young and I will prepare myself for the next Olympic Games. ”