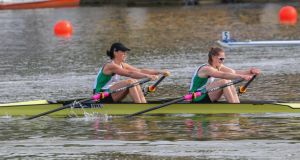 Helen Hannigan (left) and Lisa Dilleen will represent Ireland in the double sculls at the World Rowing Championships in Aiguebelette in France.

Ireland will send a big team to the World Rowing Championships this year. Eight crews will compete in Aiguebelette in France from August 30th to September 6th, four in boats that can book places for the Olympic Games next year.

Three non-Olympic crews will also compete: the new women’s four of Monika Dukarska, Leonora Kennedy, Aifric Keogh and Barbara O’Brien; the lightweight men’s pair of Shane O’Driscoll and Mark O’Donovan; and lightweight single sculler Denise Walsh. There will be one pararower: Karol Doherty, who will compete in the arms and shoulders single sculls.

Puspure, who finished fourth at the World Championships last year, will be Ireland’s main hope of a medal in Aiguebelette, though the two women’s doubles will both be aiming for places in the A Final (top six). Boats can also secure Rio places at Lucerne in May.

1 Born to ride, born to win: Sam Bennett, the making of a green machine
2 Next stop the Champs-Elysées in green for Sam Bennett
3 Keith Duggan: Surreal story of John Delaney needs to act as a wake-up call for FAI
4 Ulster’s European dream clinically crushed by Toulouse
5 Wolves to sign Nélson Semedo to replace Matt Doherty
Real news has value SUBSCRIBE