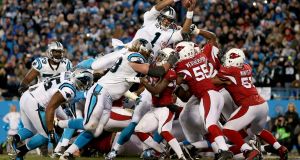 Cam Newton dives to score one of his two touchdowns in the Carolina Panthers’ win over the Arizona Cardinals. Photograph: Getty

The Carolina Panthers, led by all-around quarterback Cam Newton and a defence that forced seven turnovers, mauled the Arizona Cardinals 49-15 in Charlotte on Sunday to set up a Super Bowl 50 clash against the Denver Broncos.

Newton ran for two scores, soaring above defenders at the goal line, and threw for two others to set off a victory party at Bank of America Stadium by reaching the February 7th National Football League championship game outside San Francisco.

Carolina scored the first three times they touched the ball in seizing a 17-0 lead and led 24-7 at halftime, taking advantage of four turnovers by a shaky Arizona attack.

Last week the fast-starting Panthers raced to a 31-0 lead by intermission against the Seattle Seahawks in the Divisional Round before holding on for a 31-24 victory.

Three more interceptions of beleaguered quarterback Carson Palmer, including one returned 21 yards for a touchdown by Luke Kuechly, and cool execution by Newton in the second half expanded the rout.

“We wanted to be efficient, we wanted to start fast, wanted to keep the pressure on and wanted to finish, most of all,” Newton said after the game.

Newton, who led the team to an NFL-best 15-1 record and is the favourite to claim league Most Valuable Player award, spoke to the team at halftime about playing hard to the end.

“We won as a team. We came out here and fought our tails off, and we did what a lot of people said we couldn’t do,” Newton said.

Palmer, pressured continually by the Carolina pass rush, threw four interceptions and fumbled twice to provide the Panthers with six turnovers. Patrick Peterson fumbled a punt return in the second quarter for Arizona’s other giveaway.

Arizona looked set to cut the Carolina advantage before halftime after Peterson intercepted an overthrown Newton pass and ran it back 72 yards.

But Palmer tried to strike right back for a touchdown and was intercepted by Kurt Coleman on the very next play to set back the Cardinals.

“The interceptions. I think the big one was right before the half,” said Cardinals coach Bruce Arians.

“After the punt fumble, we get the pick and then we throw a pick. I thought that was the change in the game. But give credit to Ron and his football team.”

The seven turnovers by Arizona tied the most ever in an NFC championship set by the 1978 Los Angeles Rams against the Dallas Cowboys, and helped Carolina reach their second Super Bowl after a 32-29 loss to the Patriots 12 years ago.

“It hurts to lose like this, in this fashion,” said Cardinals veteran wide receiver Larry Fitzgerald, who was held to 30 yards receiving after gaining 176 yards last week against the Green Bay Packers.

“We just didn’t have it today. That really stings.”