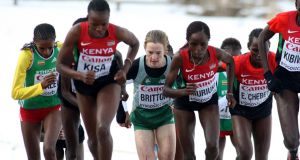 The problem with meeting expectations, rather than exceeding them, is the sense of modesty that won't raise any flags. Fionnuala Britton is still the best cross country runner in Europe, her Irish team mates underlining that status too, yet that was the limits of their impact on the World Cross Country, the all-African dominance once again emerging virtually intact.

Perhaps more telling for Britton is that in finishing 14th - despite equalling her best ever finish from six years ago - the personal expectations seemed to fall short: the now two-time European champion was intent on closing the gap on the Kenyan and Ethiopian challenge, and yet over the tough, winding course in the Polish city of Bydgoszcz, the distance was more perceptible than acceptable, her mixed emotions afterwards clearly reflecting that.

Not that Britton could have too many complaints, having put herself at the very front in the early stages, nor indeed could her Irish team mates, who packed sensibly well to finish fifth best on the day - and that's certainly nothing to be disappointed about. They were, like Britton, the best of Europe, and that was always likely to be as good as it got.

There was certainly no stopped the Africans, Kenya's Emily Chebet the brilliant winner after chasing down Ethiopia's Hiwot Ayalew in the final sprint for the finish, and with that retaining the title won on this same course three years ago. Bahrain, with several adopted Kenyans, took third, with the Americans fourth, while in finishing fifth the Irish women had the satisfaction of beating European rivals France (sixth), Britain (seventh) and Spain (ninth) - their scoring completed by Mary Cullen in 27th, Linda Byrne in 32nd, and Ava Hutchinson in 42nd, with Lizzie Lee the non-scorer in 70th.

What appeared to disappoint Britton most was that she was unable to sustain her challenge over the 8km course, losing contact around halfway, appearing a little more lethargic than usual: then it has been a long, hard season, interrupted by her European Indoor bronze medal earlier this month, not that the Wicklow athlete was making any excuses.

"Probably the finishing position disappoints most," said Britton, who ended up 44 seconds behind Chebet. "I certainly don't feel like I gave up on it, I just didn't have it. I was stuck in the same pace, and couldn't get going again. And you know when you cross the line the first thing you wish is that you were further up in the positions, because that's what cross country is all about.

Britton looked perfectly comfortable on the opening lap, briefly surging to the very front, yet the course was severely testing and no one was getting away easy: soon, she dropped behind the leaders, and although briefly recovering, then found herself trailing in around 14th position, and couldn't claw anything back on the leaders.

"I was struggling to pick people off and when you passed one person, they'd pass you back again. And I think that's the way the course was. There were parts that suited people at different times, and sometimes you could be caught out. Someone would slide around the corner in front of you and you'd nearly have to take a step back to get by them. It was difficult, but I still think it was a nice course, what cross country is."

Britton did take some consolation in the team confirming their status as the best in Europe - and now fifth best in the world (with a minor prize of $8,000 to share): "I think we ran well as a team, definitely think we justified being sent. We knew coming here, as European champions, we wanted to be able to say that we could be a top European team, so to be able to prove it that again is nice."

The inevitable question as to whether Britton was wise or not to use the indoors as part of her preparation will always linger, and she was missing some of the freshness and bounce that marked her running earlier in the season, and yet neither she nor her coach Chris Jones are putting it down to that, although Jones did agree she looked a little flat, and struggled to get into the rhythm and tempo of the race.

Cullen was perfectly content with her 27th place after her long road back from injury, and in what was her first senior race, and Byrne also ran well to make the top 35, and likewise Hutchinson inside the top 45 - although they were some ways off a medal, Bahrain scoring 73 in third to Irelanad's 115 in fifth.

The first non-African, America's Neely Spence, was just one place ahead of Britton, although the American men performed brilliantly to win silver medals, behind Ethiopia, Kenya relegated third.

However Kenya did win the individual prize thanks to Japheth Korir, the 19 year-old, who only finished sixth in their trials, yet ran from the front throughout to hold off defending champion Imane Merga of Ethiopia, with Teklemariam Medhin of Eritrea third.

Kenya won the junior women's title too thanks to Faith Chepngetich Kipyegon defending her women's crown, while the brilliant winner of the junior men's race was Hagos Gebrhiwet of Ethiopia. Remember his name in two year's time, when the World Cross Country is next staged in 2015 in... China!

Man City’s Abu Dhabi owners not the sort to back down over ban 10:51
Pints and sports events; England ready to show their best 07:30
Frank Lampard says Harry Maguire should have been sent off 06:36
Willie Mullins prefers to ‘keep it simple’ and run Benie in Mares Hurdle 06:00
Stopping Jonny May’s pace must be high in Ireland’s priorities 07:14
Here is your handy guide to sport on television this week