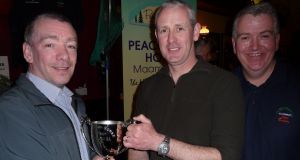 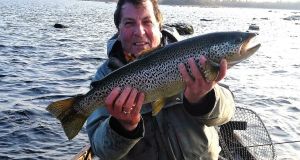 Basil Shields with 3.6kg Corrib trout on a Silver Dabbler 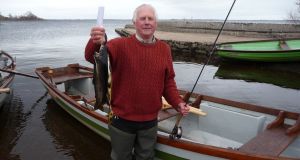 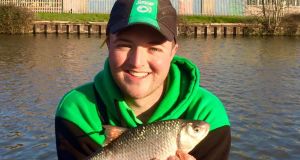 More than 100 anglers were glued to Nuacht on TG4 in Burke’s of Clonbur, Co Galway, to watch playback of the first day of the Burke’s fly fishing competition on Lough Mask. The bulletin carried a comprehensive report on the event highlighting, in particular, the importance of angling to the west of Ireland.

It was also important to the village of Clonbur in the heart of the Gaeltacht area, and to the Burke family for their initiative in hosting this popular event.

As Tomás faced the camera at waterside to give an account of events as Gaeilge, his dad, Ciarán fired the shotgun to start the competition. This brought rapturous applause and cheer from the large gathering over dinner.

The competition itself was a huge success with weather conditions ideal and plenty of trout moving in the shallows. In fact, each angler caught an average of 1.5 fish over the two days.

I teamed with Liam Conroy from Tourmakeady, a talented angler who has represented Ireland at international level. “Living close to the lough, I try to fish at least once a week,” he said.

We found fantastic success on the first day with 16 counters, all caught in the shallows and points off Inishocht, Inisgleastai, Shintillas and Devenish Islands. The Silver Daddy, Cock Robin and Fiery Brown worked extremely well.

On our second day, the fish came on late but Liam still managed his quota of three while I caught just the one.

First timer to the competition, Alan Hough from Loughrea, came up trumps with two cracking trout of 3.152kg on the second day, and when joined with two from day one, gave him an overall weight of 4.364kg, sufficient to outclass his 103 rivals.

His two big fish came within 30 minutes of each other in Ballinchalla Bay on a Hares Ear Dabbler which he purchased that morning in Anne Kyne’s Tackle Shop in Clonbur and supplied by Basil Shields from his Flies of Ireland Collection.

What makes this event a success is the friendliness that abounds throughout. Add in dinner from the “pig on the spit”, the evening singalong and the excellent catch returns and you have the perfect recipe for success.

In the interest of conservation, the committee proposes to increase the size limit from 13” to 14” on a trial basis for next year’s competition.

Still with Mask, Ronan Cusack said the water level remains high and is painfully slow to go down as the rainfall continues. Duckfly hatches are reasonably good on warmer days with a scattering of sedges.

Ronan fished with his son Conor and managed five keepers, two of which were on the one cast (all returned). Eugene Fagan (Kildare) reported having a fish of 2kg on the Rocky Shore, and father and son team Martin and David Connors (Armagh) had six fish (best 1.2kg).

Poor weather on Sheelin
On Sheelin, fisheries officer Brenda Montgomery’s guidance at this stage of the season is to limit the angler’s hopes and this advice was necessary for last weekend’s Sheelin Classic.

Now in its 11th year, the event previously had an unblemished record for attracting the brightest day of the season but this year that record was broken as bitterly cold winds tore across the lake.

The morning sported reasonable conditions but the afternoon brought heavy downpours and strong winds, creating dangerous mid-lake conditions. Most of the catches were in the shallows and shorelines, in bays and behind islands.

Ronan McCarthy (Westmeath) landed a cracking fish of 2.5kg on buzzer, while Glen O’Connell (Shannon) had two fish on buzzer for over 2.6kg.

Drowes catches pick up
After a slow start to the season, the Drowes has really picked up and for the week ending last Sunday, 20 salmon were recorded. Among the catches, both Mark Donaghey and Kieran Conlon caught and released salmon of 4kg and 4.5kg from the Mill Pool and Broadwater, respectively.

Browne’s canal experience held him in good stead throughout fishing two of the hardest sections to win his sections on both days. Fishing was good with catches of roach and bleak, a few skimmers and occasional bream.

Scientific study of silver eel
A network of scientific fisheries is to be set-up around Ireland to increase data and knowledge of the silver eel, ahead of the 2018 EU review of the national eel management plan, according to Inland Fisheries Ireland (IFI).

The European eel is critically endangered and in 2007 the EU introduced a regulation requiring member states to implement management plans to help eel stocks recover.

Latest advice from the International Council for the Exploration of the Sea (ICES) is that all mortality affecting silver eels should be as close to zero as possible.

IFI’s Dr Gallagher, said: “The programme presents a great opportunity for eel fishermen to work with IFI to get an understanding of the process involved in gathering data to undertake stock assessments.”