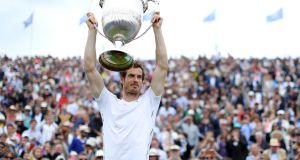 Andy Murray won a record fifth title here, coming from a set down to still the impressive challenge of Milos Raonic in two hours and 12 minutes on a mild, grey day that did not reflect the tension on court – and off it.

The last time Ivan Lendl and John McEnroe faced off at Queen’s, 26 years ago, the former won 6-2, 6-4 in the semi-finals. Here Lendl, born in Czechoslovakia but a long-time American citizen, was happy to take another win, vicariously, as his player, Murray, beat his old rival’s player, Raonic, 6-7, 6-4, 6-3.

The players maintained beforehand the presence of their high-profile coaches meant nothing. The Queen’s Club patrons thought differently, as did most of the media, as we watched for the slightest twitch from either coach.

Only Roger Federer among active players has won more than Murray’s seven titles on grass, but this was Raonic’s debut in a grass-court final, and he acquitted himself admirably.

A lovely stop-volley in the first game of the match showed how he has grown in confidence and acumen at the net, the part of the court so loved by McEnroe in his day. Their experiment is perhaps the most fascinating of all the tie-ups between past and present heavyweights, given the contrast in the style and court presence of Raonic and his grey-haired guru. McEnroe was a light-stepping butterfly, Raonic is a heavily-armed blaster who has had to learn the subtleties.

Murray had the best of the early going, one long, artful rally in his second service game filled with more quality shots than many whole games, the last of them a stunning forehand winner, hit on the run into the advantage corner, an inch from the baseline.

When they played a tough five-setter at the Australian Open this year, Raonic was struggling with injury – no doubt exacerbated by Murray’s ruthless exploitation of it – but he was fully fit here, as he demonstrated with an acrobatic leap and smash to hold for two all.

By the time he stepped up to the line in the 10th game, Raonic had struck five aces, and Murray watched another two fly by – as well as a deft pick-up that kept him in the set. Raonic forced the tie-break, holding to love. He had won three of their previous four shoot-outs but, while Murray doesn’t match him for raw power, his serve has been in good shape, especially in the semi-final win over Marin Cilic in Saturday. Here it clicked nicely again, but Raonic forced him to take risks, drawing him forward and passing to take the first set in 53 minutes.

Murray’s dilemma was obvious: to match Raonic at close quarters or play his waiting game, because most of his successes had come when guiding the ball down the lines, and much of his grief was inflicted at the net. A huge Raonic forehand that pinned the Scot deep for a botched return and break should have given Murray the answer.

The Canadian was flying after an hour’s excellent tennis. He held to love for 3-0 and a quick kill was on the cards unless Murray could find some magic. He has come from three games down many times, especially in big matches in big tournaments.

A charge into the box, and a couple of line calls in his favour helped him to deuce – then his first break point of the match after an hour and 13 minutes. He clinched the break with a superb backhand return that left Raonic stranded in mid-court. It was a fascinating battle of mind and will.

When he got back on level terms in the sixth game, what had earlier looked like developing into a rout was now a proper contest. Murray got two break points in the seventh game, converting the second when Raonic failed to control a running forehand on the deuce side.

As they approached the 90-minute mark, Raonic held to stay in the second set nearly 40 minutes after he had done so in the first except this time he was a break down, and the challenge passed to Murray to serve out and level the match. He did so without fuss and they went to a third set, a prospect that probably had not crossed Raonic’s mind only a few games earlier.

When Murray drop-shotted him to break at the start of the third, Raonic’s legs, so spritely earlier, bore the mark of all that running, and it was his turn to fret and Murray’s to rant. He had been reasonably self-contained for an hour and 45 minutes; now he let his emotions flow a little.

In the break after five games, McEnroe, agitated, stretched his legs; Lendl remained seated and impassive. The players remained on edge, although it would be tough to pick who was winning from their demeanour, as Murray continued to fidget.

Raonic saved two match points with body-stretching smashes, but botched the third, his rushed volley banging into the net.

5 Frank Lampard: ‘the good thing for me is I’m good at handling pressure’