Kinsale Mead is creating a new drink from old methods, and bringing mead to a wider audience with support from the Food Academy programme 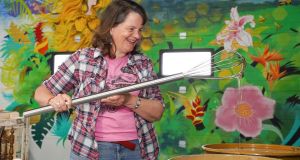 Kate Dempsey: “All sorts of people like it – the craft beer people are always interested in trying a new drink. Then there are those who want to support local as well as the people who are into supporting biodiversity and bees.” Photographs by Conor Mulhern

As the first mead makers in Ireland in over 200 years, Kate and Denis Dempsey of Kinsale Mead Co. had to step up to the mark when it came to making an authentic drink.

The couple had been fermenting their plan for a long time ahead of the company’s 2016 launch. “A friend was visiting from England and we took her to the Hill of Tara,” Kate recalls. “We stood on the point of the great Mead Hall and I thought, this is a sign. We started off making a home brew to work out what we liked and didn’t like. We talked to lots of people from the mead-making community, many in the USA.”

To begin with, they had to figure out their raw ingredients. Mead’s main ingredient is honey, but as Kate says, “Ireland is a low producer of honey, so we needed to get bigger barrels, and there is fantastic quality honey in Spain.”

A move from Maynooth in Co Kildare to Co Cork’s gourmet capital, Kinsale, followed, where Kate and Denis sought help from the local enterprise board (LEO) and Bord Bia and began to make larger batches.

Kinsale Mead takes the techniques and methods traditional to ancient meads, and updates them with ingredients for a modern palette.

“You can make it very sweet but our meads are off dry, rather than dry,” Kate says. “When mead was made a very long time ago, honey was precious, particularly in Ireland. Honey bees don’t like foraging in the rain – and of course we have plenty of that in Ireland – so they wouldn’t have used a lot of it in mead back then. Therefore we think it would have been off dry. Berry mead would have been commonplace also, we believe.”

The berries they use come from various local suppliers, mainly Wexford, while water comes from Innishannon, upriver from Kinsale, along the river Bandon which rises in the Shehy Mountains.

The honey, fruits, water and yeast in Kinsale Mead’s offerings are mixed and this ferments in about three to five weeks. They currently make three variations of the drink: Atlantic Dry, Wild Red and Hazy Summer, all stocked in SuperValu. Each contains an alcohol percentage of 12 per cent, similar to wine.

Once things began to take off, SuperValu’s Food Academy proved very useful, offering a lot of practical help and guidance at an early stage. The Food Academy works with the LEO and Bord Bia to help nurture small businesses all the way from startup to getting on the shelf in stores.

“They gave us advice on labelling, marketing and sales, mentoring us through the difficult startup stages,” Kate says. “A huge part of that was the network of other Cork food and drink suppliers who were so welcoming and supportive at all stages and still today. We cheer each other on, we boost each other up and we buy each other's products too. The Food Academy is more than a marketing idea, it really does support and nurture the local businesses who continually produce the most amazing food and drink.”

We won gold for the Atlantic Dry, a huge accolade seeing as it is judged by our peers

Four years on and numerous awards later, the couple is thrilled that there has been so much renewed interest in a product that most people may have only read about in literature or history books.

In fact, Philippines Tatler classed Kinsale Mead, alongside Guinness, whiskey and Baileys, as one of four drinks you must try when visiting Ireland, an accolade Kate is rather proud of.

And even though mead is not as prevalent in Ireland as it is worldwide, the company won big at the Mazer Cup, a global awards for mead makers, held each year in the US. “We won gold for the Atlantic Dry, a huge accolade seeing as it is judged by our peers,” Kate says.

As well as this, Kinsale Mead took home the Blas na hÉireann gold in 2018 for Wild Red and gold in 2019 for Hazy Summer. It has also been awarded two stars by the UK’s Great Taste awards for Atlantic Dry.

“All sorts of people like it – the craft beer people are always interested in trying a new drink. Then there are those who really want to support local as well as the people who are into supporting biodiversity and bees,” Kate says.

“Atlantic Dry has citrus and floral flavours. It should be served chilled or over ice. It goes well with seafood, especially oysters. It’s nice with salty snacks too, some posh crisps or almonds and olives.

“Wild Red is made with Wexford blackcurrants and dark cherries. It has a beautiful balance of tart and sweet – it’s matured for about 18 months, so it’s very smooth compared to a red wine. This goes well with pasta, pizza and good quality chocolate.

“Hazy Summer has six varieties of summer berries including strawberries and raspberries. It’s very summery but we have had it with our Christmas dinner. It’s also good with a barbeque or a berry pavlova,” she says.

For regular Kinsale Mead drinkers, Kate and Denis have just released a small batch of Irish Wildflower Mead, with honey coming from a local beekeeper based in Clonakilty.

Up until lockdown, the couple offered tours of the meadery, but that remains closed for now and they hope to reopen soon. Customers have shown their support in other ways.

“People were looking for an affordable treat, and our online shop really took off. We were shipping out every day. People were sending to friends and family, along with some personal messages, which was lovely,” Kate says.

This summer, it’s likely those friends and family will be meeting for the first time in a long time in gardens and houses around the country. Kinsale Mead just might be the perfect tipple to accompany those much longed-for reintroductions.

Food Academy provides support for Irish and local food and drink producers, as well as superior quality products to discover in all its SuperValu stores.