Fan who 'eats, sleeps, and breathes rugby' wins competition to be a mascot in Japan 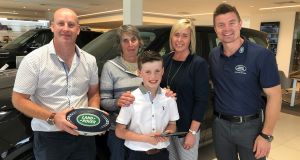 It was back to school with a difference for one lucky rugby fan last week. It’s not every day a rugby legend shows up to tell you you’ve won the trip of a lifetime to act as an official Land Rover mascot at Rugby World Cup 2019, Japan.

Land Rover ambassador and retired Irish rugby international, Brian O’Driscoll told a stunned Kyle Leybourne that he will be travelling to Japan later this month to take his place in the players’ tunnel and walk the Irish team out onto the pitch at International Stadium Yokohama for their first match of the tournament against Scotland on September 22nd.

Unsurprisingly, entries flooded in from eager rugby fans around the country. This made it a tough task for the judging panel, which included Jaguar Land Rover representatives and Brian O’Driscoll himself.

“There were loads of entries from boys and girls all over the country but, alas, there can only be one winner,” says O’Driscoll.

But Kyle, who is 11 and from Tullow in Carlow, clearly stood out. He was chosen for his heartfelt video, championing his credentials as a dedicated fan, his energetic dance moves and his rendition of Ireland’s Call. He even dyed his hair green in a bid to show his dedication to the boys in green, and showed off his command of the Japanese language.

Told he was on the final shortlist to win the competition, Kyle and his family met with Land Rover in Dublin to deliver one last video plea to win the amazing prize. As he began to make his case again in front of the cameras, he was surprised by Brian O’Driscoll who sneaked up on him.

The legendary centre delivered the news to him in person that he had, in fact, won the competition and would be flying to Japan later this month.

Kyle – who admits in his video that he “eats, sleeps, and breathes rugby” – was in disbelief. Once the news had sunk in, he said he would be taking his dad to Yokohama – sorry Mum!

Kyle plays for Tullow Rugby Club and was thrilled to share the news with his teammates. He is just one of a number of lucky children from around the world, one from each of the participating nations, being given the once-in-a-lifetime-opportunity of being right at the heart of the action on rugby’s biggest stage.

“It was fantastic to see how delighted and excited Kyle was once he realised he had won the Land Rover competition. His reaction was that of a true young rugby fan,” says O’Driscoll.

“Attending the Rugby World Cup is a significant achievement for any player and now Kyle will have the chance to experience the excitement of the tournament from the pitch himself."

An excited Kyle is over the moon as he begins to pack for his trip to Japan. “To walk out with Rory Best will be amazing – I can’t wait.”

Land Rover has been at the heart of rugby for over two decades, from grassroots to the pinnacle of the sport. Rugby partnerships around the world include top-flight properties in France, Australia, South Africa and England, Rugby World Cup 2015 and Rugby World Cup 2019.