Inchydoney Island Lodge & Spa offers cosy escapes during the colder months, or something a bit more exhilarating to those looking for adventure along the Wild Atlantic Way 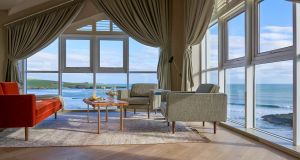 The hotel is the ultimate cosy escape for those wishing to hibernate during the colder months.

Location, location, location. Inchydoney Island Lodge and Spa can be found in one of the most beautiful corners of Ireland, perched between Inchydoney’s twin sandy beaches on the West Cork coastline. You really do wake to the sound of the waves lapping (or crashing) on the shore.

The four-star hotel may offer an idyllic hideaway from the elements, but it also manages to bring them in with great effect; whether it’s the warm seawater in the therapy pool, the algae used in their spa treatments, or the unique carved wooden furniture.

The rooms have a definite “Cape Cod” vibe, with crisp white linens and blue walls, complementing the sea views from your terrace or balcony. All the little touches you expect are there (and many more you don’t); velvety robes, powerful hairdryers, and (glass) bottled water. Elemis toiletries are a special treat.

Yet this is a conscientious break away from reality; Inchydoney prides itself on its commitment to sustainability, and while this is subtly evident throughout your stay, it in no way detracts from the experience. Recycling is encouraged and the hotel recently switched to a biogas heating system, but it is the emphasis on local produce and respect for their beautiful environment that you notice.

And while the hotel is the ultimate cosy escape for those wishing to hibernate during the colder months, those seeking to venture outside for something a bit more exhilarating won’t be found wanting. You are on the Wild Atlantic Way after all.

The hotel offers free bikes which you can use to explore the area at your leisure or there are numerous golf courses nearby. Meanwhile those crashing waves are made for surfing; Inchydoney Surf School is just outside the door, and all levels of ability – or lack thereof – can be catered for.

Indeed, it makes sense to take advantage of where you are in the world. According to Christopher O’Sullivan of Atlantic Whale & Wildlife tours, there are no less than nine species of whale to be seen off the West Cork coast.

During a four-hour trip on one of their boats, you might see mighty humpback whales, fin whales, or minke whales, as well as playful bottlenose dolphins and porpoises. O’Sullivan notes that people will travel as far afield as Alaska or Australia in the hope of a whale sighting and often don’t realise that Ireland is one of the prime locations for spotting these magnificent creatures. The crew will venture out in all types of weather, as long as the wind isn’t too high, so it isn’t just confined to the summer season. Wrap up well – you will almost certainly get wet – but it will be more than worth it.

Jim Kennedy, who has been running Atlantic Sea Kayaking with his wife Maria for over 20 years, says adventure tourism is no longer a niche – up to 90 per cent of people now want some sort of adventure from their travels. And he agrees that it doesn’t have to be the height of summer to enjoy it – it doesn’t even have to be while the sun is up. Kennedy will bring you on a Starlight Kayak, guided only by pretty bio luminescence in the clear Atlantic water, or you can head out before the sun rises to enjoy the dawn chorus.

He explains that the sheltered nature of the West Cork coastline makes for perfect kayaking conditions, and it is suitable for all ages – his father-in-law took it up at the ripe age of 90. The company has won numerous awards for its commitment to both “green” and “blue” tourism – you will paddle back with a newfound respect for marine life.

The sea air will work up that appetite. Back on terra firma, Inchydoney is widely known for its food offering, sourcing the best in ingredients from local suppliers. Dunes Pub and Bistro offers serious food in casual surroundings – think seafood, salads and sandwiches, as well as heartier main options like Skeaghanore duck or the Shannonvale chicken schnitzel burger. Like with any good eatery, locals mingle with tourists at the tables.

Up on the third floor is the Gulfstream Restaurant. Stunning as they are, those Atlantic sea views won’t distract you from your excellent food. Naturally, locally caught fish features heavily, but omnivores can choose from options like Ballinwillin venison or Caherbeg free-range pork. Breakfast is also served here, and while the continental buffet is groaning under the weight of its myriad options, you can also order the full Irish or even the catch of the day from the kitchen menu. A brisk walk on the beach is recommended afterwards.

No break away is complete without some indulgence, and the award-winning spa at Inchydoney is a big draw. The warm seawater of the indoor pool makes for pleasant swimming (or floating), while jets and bubble seats will soothe aching muscles. Treatments available in the spa include an invigorating marine body polish that will buff your skin until it glows, which you can follow with a soothing algae body wrap. These are pleasurable but effective treatments where you are still enjoying the results (i.e. silky smooth skin) for days afterwards.

The hotel is also especially family-friendly; a treasure trove of a children’s room packed with toys and books is opposite the residents' lounge, and there are special hours during which kids can enjoy the pool. High chairs discreetly appear in the restaurant and bar before you have the chance to request them, and the dedicated kids' menu is a big hit with little ones.

Sustainability is high on the agenda in Inchydoney, which has a large array of solar panels, a wood pellet heating system and composts all its food waste.

But sustainability is not simply a buzzword for them; owner Des O’Dowd says it has been a fundamental part of the hotel’s ethos since it opened 22 years ago. This means it isn’t just paper straws – although they have those too – but rather a focus on local provenance, whether it’s food or furniture.

West Cork is a close-knit community, and this is evident from the strong links the locally owned and operated hotel enjoys with neighbouring businesses. What the four-star hotel achieves is a happy marriage of sustainability and luxury. The friendly and helpful staff are the icing on the cake.

Leave with a pot of their homemade jam and plans to return year after year.