Healthy Town: We need to talk about men's health

Men are becoming more open about their health, but overeating, smoking and drinking too much are still concerns 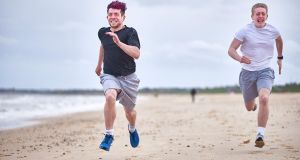 Traditionally men have always been reluctant to seek advice on medical health problems, often preferring to battle out ailments rather than ask a doctor for a solution.

But this can be dangerous as a reluctance to look for help can result in conditions worsening to the point that they may become untreatable.

So throughout the Pfizer Healthy Town initiative and beyond, experts are encouraging men to break the stereotype and start taking more of an active interest in their health, both physical and mental.

Pharmacist Rose Finlay from Tullamore says already she has seen an increase of male customers opening up about their ailments and asking for help.

“Men are notoriously slow to seek medical advice but we encourage them not to be afraid or nervous about coming in to talk to us about their health concerns,” she says. “The most common ailments we see from males in our pharmacy are hair loss, low energy, high blood pressure and low moods.

“And thankfully we are finding that more and more men are coming in to us to discuss issues like this with us and confiding in us about problems they are having.  This is good because we can offer them advice on how to improve these ailments and direct them to their doctor if we consider this necessary.  We also have leaflets on a lot of these issues for them to take away and read, as well as supplements to take to improve these problems, which men seem to be finding very useful.”

But while it is encouraging that men are becoming more open about their health concerns, overeating, smoking and drinking too much is still a problem.

According to the HSE, the majority (55 per cent) of men who drink, consume six or more standard drinks - or binge drink - on a typical drinking occasion, while less than 18 per cent of women drink to this level.

Cutting down on alcohol consumption can lead to weight loss, improved sleep, energy and overall health.

“It can also help with better mood and concentration and to reduce depression and anxiety,” says a spokeswoman for the HSE.

And as heart disease is the biggest killer in Ireland, Dr Angie Brown - medical director of the Irish Heart Foundation - has a number of simple steps to help men look after their heart health.

“It’s important to give up smoking and cut down on alcohol – also to take time to de-stress, to visit your GP regularly and know your family history.”

“It is also important to be active for at least 30 minutes five days a week, to eat well and up your intake of fruit and vegetables and try to include some grains, like rice, in your diet. Fish is brilliant so eat it at least twice a week. And lastly, I would encourage people to watch their weight – be aware of your healthy range and try to stay within it.”

Dr Cliodhna Foley-Nolan, director of human health and nutrition at Safefood agrees and says obesity is a rising problem in Ireland which can lead to many health issues, particularly for men.

“The rate of overweight and obesity in younger men (15-24 years) is 31 per cent but as men get older, they gain weight and in the 55-64 year age group, 83 per cent are either overweight or obese - so older men and those who are less educated are most at risk of high blood pressure and hypertension caused by obesity.”

The nutrition expert says there are a number of things men can do to reduce their risk, including:

And while it is vital for men to look after their physical health, poor mental health can cause many problems.

Brid O’Meara is the director of services at Aware. She says women are more conscious of mental health issues, so men need to make more of an effort to get in touch with their feelings and seek help if necessary.

“According to the World Health Organisation overall rates of psychiatric disorder are almost identical for men and women but striking gender differences are found in the patterns of mental illness,” she says. “They say that depression is far more common in women than in men, as much as 2:1, whereas men are reported to have twice as high a prevalence of alcohol dependence than women. But women are more likely to seek help for mental health problems than men and it is reported by the WHO that doctors are more likely to diagnose depression in women compared to men even when they present with similar symptoms.”

However, despite the global trend, the tide seems to be turning in Ireland and mental health organisations are becoming more positive about the future.

“At Aware, we have a larger number of men attending our nationwide support groups than women,” says Brid O’Meara. “We have also noticed that where the ratio of men to women calling our support line was in the region of 40:60 per cent, there has been an increase in calls to our line and a balance in the gender divide to closer to 50:50 per cent in recent months and at Aware, we welcome this.”

For more advice on how to stay healthy visit: