Why is Presbyterian Church in Ireland marching into the dark?

Presbyterians are dominated by male conservatives hung up on homosexuality 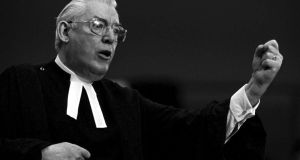 The Presbyterian Church in Ireland has more in common with the hardline Free Presbyterians that Ian Paisley founded than its own far more relaxed, progressive mother church in Scotland.

The Presbyterian Church in Ireland (PCI) seems intent on becoming some kind of punitive Paisleyite caricature of itself. By barring same-sex couples from being full members and – still more egregiously – banning gay people’s children from being baptised, the PCI has found itself having more in common with the hardline Free Presbyterians that Ian Paisley founded than its own far more relaxed, progressive mother church in Scotland, with which it has now loosened ties.

Dissent from the current regime will not be permitted, it appears. The clerk of the general assembly, Rev Trevor Gribben, sent out an edict warning all Presbyterian ministers against bringing the church “into disrepute”. When Prof Laurence Kirkpatrick of Union Theological College, the Presbyterian training college in Belfast, publicly expressed some mild criticism of the church’s stance, he found himself promptly suspended from his job.

There have been a few high-profile resignations from the PCI, most notably Lord John Alderdice, former leader of the Alliance party and one-time speaker of the Stormont Assembly. And a heartfelt but rather vague statement signed by 232 prominent Presbyterians expressing their “hurt, dismay and anger” was issued, without apparent penalty. Yet most moderates within the church – including those who actually put their names to the statement – have gone to ground, refusing to speak out in public.

So why has the Presbyterian church – still Northern Ireland’s largest Protestant denomination, despite falling numbers – decided to retreat into this cold, ugly form of exclusionary fundamentalism, so defiantly out of kilter with the spirit of the times? After all, it’s one thing to maintain the traditional religious belief that marriage can only be between a man and a woman, and quite another to ban same-sex couples from participating fully in worship and to deny their offspring Baptism.

Suffer the little children to come unto me – unless they happen to have gay mums or dads, as Jesus definitely did not say in the Bible.

It appears that the PCI is dominated by an influential rump of male conservatives who are hung up about homosexuality, as well as suspicious and hostile (for which read fearful) of female authority. The first female minister, Dr Ruth Patterson, was ordained well over 40 years ago, yet women still make up only a small proportion of active ministers, very few are nominated as elders, and there has never been a woman moderator of the church.

Why has the Presbyterian church decided to retreat into this cold, ugly form of exclusionary fundamentalism?

In 2015, Rev Christina Bradley of Portadown was the only Presbyterian minister in Ireland who welcomed the result of the same-sex marriage referendum in the Republic, remarking that such “warm-heartedness is good to see in a world which often is a cold place for women in leadership as it is for gay and lesbian people in churches”. Bradley recanted, but the views she expressed were investigated by a special commission, and its conclusions were read out in her own church, as she listened in silence.

Unlike the boorish, guldering bigots of the Save Ulster from Sodomy era, who described homosexuality in luridly offensive terms, many of today’s leading Presbyterians cloak their prejudice against gay people and women in pompous, abstruse theological language, presumably in an attempt to make everything sound kinder and nicer.

For instance, the doctrine committee of the church, which drew up the recommendation to deny same-sex couples “communicant membership”, and by extension to refuse their children Baptism, was keen to signal its virtue. “All who wish to sit under the means of grace” are welcome at public services and can receive pastoral care, it announced: “Like her Lord, she [the church] reaches out with compassion.”

But certain families should not get too comfortable: “This posture of grace and welcome should not in itself be confused with moral indifference or approval of any behaviour contrary to God’s Word.”

In other words, gay people and their children can come to church, but they will remain the subject of active moral disapproval, and must occupy a special, separate place in the hierarchy of sin. If this is the PCI’s idea of a warm welcome, I’d hate to see a chilly one.

The Very Rev Dr Stafford Carson, who serves both as principal of Union Theological College and as convenor of the church’s doctrine committee, is also opposed to the ordination of women ministers. He describes himself as a “complementarian”, another obscure, emollient-sounding term which provides cover for Carson’s actual view that teaching and preaching God’s word should be reserved for men only.

Many have described the PCI’s lurch towards fundamentalism as regressive and retrograde, but that’s not entirely true. Belfast Presbyterians in the late 18th century were some of the most forward-thinking people on the island, standing up for the principles of equality, liberty and enlightenment. It seems bitterly ironic that the 21st century church, by contrast, has chosen to march away into the dark.

Fionola Meredith is a journalist and commentator