Brian Boyd: People of Stoneybatter prepare to be gentrified

Whether Dublin rises up in protest against the presence of a Cereal Cafe among its streets broad and narrow remains to be seen. 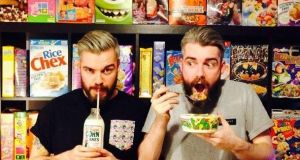 Alan and Gerry Keery run the Cereal Killer Cafe in Shoreditch. Anti-gentrification protesters told them to get out.

Last September, in the Shoreditch district of London’s East End, an angry, masked crowd numbering hundreds of people, some of whom brandished pigs’ heads and flaming torches, targeted a business run by two working-class Irish men. Protesters wrote “Scum” in blood on the window of their business premises and told them to get out of Shoreditch.

It’s okay, however, because the attack on the business opened in December 2014 by twins Alan and Gary Keery, the Cereal Killer Cafe, was in the noble name of “anti-gentrification”.

The cafe is a preposterous place that sells bowls of cereal for between £2.50 and £4.40 – so preposterous that the Keerys have opened a second branch, in Camden, and business is booming.

The protesters said they marched on the cafe because: “Our communities are being ripped apart by Russian oligarchs, Saudi sheiks and Israeli scumbag property developers.” There was no mention of “Irish chancers trying to make a few bob selling Rice Krispies”.

The Keerys, who are gay, want to open a branch in Dublin this year, choosing the city over their native Belfast because “if Belfast isn’t ready for gay marriage, then it isn’t ready for a cereal cafe”.

It can be located only in Stoneybatter, which the Guardian last week referred to as “Little Williamsburg by the Liffey”, a reference to that area of Brooklyn where if you don’t have a bespoke tattoo, work in a “creative hub” or play in a band, you don’t belong.

Whether Dublin will rise up in anti-gentrification protest against the presence of a cereal cafe remains to be seen. The London protesters’ more general point was that it was wrong to have a boutique cafe selling expensive bowls of cereal in an area where children were going to bed hungry. As they put it: “We don’t want pop-up gin bars or brioche buns. We want community.”

That the debate over a complex socioeconomic issue is being played out with reference to gin, brioche buns and Rice Krispies is tragicomedy at its finest.

Gentrification is a myth. At least in how the argument is currently framed. The “authentic community” fetishisers are white, middle-class people who consider themselves “edgy” by dint of the ready availability of a Guatemalan latte.

These are the truly wretched, as people in Williamsburg demonstrated when they protested over the opening of a pharmacy chain outlet across the street from a long-established mom-and-pop pharmacy. It was dubbed “the battle for Williamsburg’s soul”. As Gawker headlined its story: “Horrible Williamsburg residents horrified by arrival of horrible chain stores”.

And there are those who argue gentrification “improves” an area as much for existing residents as for newer arrivals. The rather horrifying argument is that the arrival of entitled, middle-class professionals ensures basic services and the appearance of the areaare upgraded, because that is what entitled, middle-class professionals want and get. As if these demands are alien to the people already residing in the area.

Ironically, gentrification is self-defeating. The urbanite quest for a cheap-yet-hip living area is Sisyphean: as you rejoice in your culturally diverse artisan nirvana you wake up one day to find out civil servants have moved in beside you to wreck your authentic community buzz – and not even ethnic civil servants who might have had interesting recipes to share.

I lived for a while in pre-gentrified Little Italy in New York. People slept in cardboard boxes on doorsteps, there was the odd clap of gunfire and heroin was cheap. Now it’s all scented candles and vegan clothing shops populated by inbred hedge-fund managers who have parties that end at 11pm.

My old neighbour loves what are now facetiously referred to as the “BWPs” – boring white people – who have gentrified the area. She says her granddaughter can walk home from the subway at night feeling safe; the streets are cleaner; the buildings are kept better; and the local dive bar has been reupholstered. And she likes the way the BWPs call her “ma’am” and help her with her shopping.

The voice of an 81-year-old black woman who had to march from Selma to Montgomery as a young woman to get a vote in the country in which she was born belongs beside that of the anti-gentrification protesters in London who marched on a hipster cafe in Shoreditch.

For all the self-serving sneering and middle-class squawking about gentrification, it’s salutary to remember that it means different things to different people at different times.

There are only two certainties. No, Ringsend is not the new Kreuzberg. And yes, there is more to this than pricey Rice Krispies.

1 One hundred Irish retailers for all your online Christmas shopping
2 Des Bishop apologises to Traveller community for comments in interview
3 What I learned about male desire in a sex-doll factory
4 How long can Government afford to keep State pension age at 66?
5 Gym owner plans to defy restrictions and open
Real news has value SUBSCRIBE