Southern state ignores opposition from Mexico and from US State Department 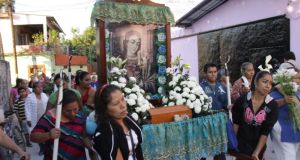 Relatives of Mexican inmate Edgar Tamayo Arias walk in a procession in Miacatlan, Mexico. Edgar Tamayo Arias was executed by lethal injection in Texas, USA, on 22 January despite protests from Mexico and objections by the US State Department, after a last minute appeal to the US Supreme Court was turned down. Arias was sentenced to death for the killing of a police officer in 1994. Photograph: EPA/Roberto Sanchez 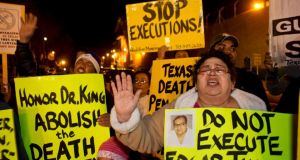 Protestors sing and chant outside the “Walls” prison unit where Edgar Tamayo was executed in Huntsville, Texas. Photograph: Richard Carson/Reuters 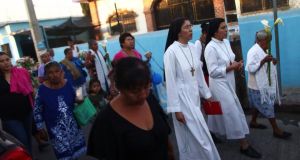 Nuns, friends and neighbours of inmate Edgar Tamayo walk during a procession, praying for him in Miacatlan, Morelos state yesterday. Photograph: Edgard Garrido/Reuters

Despite opposition from the US State Department, Mexican officials and Latino advocates, Texas executed Edgar Arias Tamayo last night, putting to death a Mexican citizen whose case raised questions about the state’s duty to abide by international law.

Tamayo (46) was strapped to a T-shaped gurney in the state’s death chamber at a prison in Huntsville, injected with a lethal dose of the sedative known as pentobarbital and pronounced dead at 9.32pm. Tamayo was the 509th inmate executed by Texas in the past three decades and had been one of 21 foreign citizens on its death row.

The case became an international issue that Mexican officials and US Secretary of State John Kerry said threatened to strain relations between the two countries. Tamayo’s arrest in Houston in 1994 on charges of murdering a police officer violated the international treaty known as the Vienna Convention on Consular Relations. The authorities neglected to tell him of his right under the Vienna Convention to notify Mexican diplomats.

In executing Tamayo, Texas officials disregarded an international court’s order that his case be reviewed to determine what impact the violation of his consular rights had on his conviction. That decision - made in 2004 by the World Court, the top judicial body of the United Nations - was binding on the United States under international law, Mr Kerry had told Texas officials. No US court had given Tamayo such a review.

Texas Governor Rick Perry and state attorney General Greg Abbott had argued that the state was not directly bound by the World Court’s decision, a position backed up by rulings by the US Supreme Court and the Texas Court of Criminal Appeals. Tamayo was the third Mexican citizen that Texas had executed whose case was part of the World Court’s order.

“The international outcry about this, Texas’ third illegal execution of a Mexican national and the first without any review whatsoever of the consular assistance claim, is unprecedented,” Tamayo’s lawyers, Sandra L. Babcock and Maurie Levin, said in a statement.

In the hours before the execution, Tamayo and his lawyers were awaiting rulings on two appeals before the Supreme Court. One claimed that Tamayo was mentally disabled and ineligible for the death penalty. The other argued that the impact of the denial of Tamayo’s consular rights needed to be assessed by a court. The Supreme Court refused to stay the execution, but it was delayed a few hours.

Tamayo had seemed resigned to his fate. In a holding cell in Huntsville, he told a spokesman for the state’s prison agency earlier in the day that he was “ready to go,” adding, “Twenty years is too long.” A human rights commission that is an arm of the Organization of American States urged the United States last week to halt the execution and grant Tamayo’s case the review the World Court had ordered. Meanwhile, Kerry and State Department officials expressed concerns to Texas officials that executing Tamayo would complicate the United States’ ability to help Americans overseas. The Vienna Convention helps ensure that US citizens who are detained in other countries have access to food, medical care and legal representation.

“If we ourselves don’t uphold those obligations, it will make it much harder for us to ask other countries to do so,” a State Department spokeswoman, Marie Harf, said on Tuesday. Tamayo was convicted of killing Guy P Gaddis, the Houston police officer who apprehended him and another man in January 1994 after a robbery. Tamayo, who was in the United States illegally, pulled out a pistol in the back of the patrol car and shot him three times. Gaddis was 24, and four days before his death, he had learned that he was going to be a father.

Members of the officer’s family, including his mother, witnessed Tamayo’s execution. “Three times shot in the back of the head for simply doing his job as a police officer,” said Ray Hunt, president of the Houston Police Officers’ Union. “That’s how his life ends. It’s time for that sentence to be carried out.”