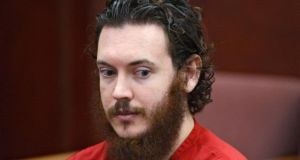 James Holmes: killed 12 people and wounded 70 in July 2012 during a shooting spree at a midnight screening of Batman film The Dark Knight Rises. Photograph: Andy Cross/Reuters

James Holmes, the gunman behind the Colorado cinema killings, could face the death penalty after jurors found that aggravating factors, including the cruel nature of his crimes, counted for more than mitigating ones such as mental illness.

The panel of nine women and three men will now hear from victims of the July 2012 shooting spree at a midnight screening of Batman film The Dark Knight Rises.

They will then deliberate on whether the 27-year-old shooter should be executed by lethal injection.

After warning members of the public against making any emotional outbursts in the small, windowless courtroom on the outskirts of Denver, Arapahoe County district court Judge Carlos Samour began reading the jurors’ forms.

Holmes, who killed 12 people and wounded 70, showed no reaction as the verdicts were delivered, staring straight ahead.

The jury had deliberated for less than half a day on whether mitigating factors outweighed aggravating ones. – (Reuters)