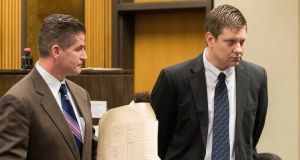 The Chicago police officer who shot a black teenager last year pleaded not guilty to murder charges on Tuesday, as the mayor, Rahm Emanuel, cut short a vacation after two more fatal police shootings over the weekend.

Meanwhile, protesters will demonstrate in front of the Cuyahoga County prosecutor’s office in Cleveland on Tuesday, a day after a grand jury decided not to charge two white police officers in the 2014 shooting dead of Tamir Rice, a 12-year-old boy who was playing with a toy gun in a park. Tamir was black.

Chicago Police officer Jason van Dyke, who is white, faces six murder charges and one count of official misconduct for killing Laquan McDonald (17) in October 2014. Mr van Dyke’s lawyer said he may ask for a change of venue.

“We’re certainly going to explore every opportunity we have in order for my client to have a fair trial,” attorney Daniel Herbert said after the hearing.

The release last month of a video of the shooting, which shows Mr van Dyke shooting Mr McDonald 16 times, set off a wave of protests and calls for Mayor Emanuel’s resignation.

High-profile killings of black men by mainly white police officers since mid-2014 have triggered waves of protests across the country and fuelled a civil rights movement under the name “Black Lives Matter”.

Mr McDonald’s great uncle, Marvin Hunter, said after the hearing that Mr van Dyke’s trial should be televised so the public and the family “can feel that we’re getting a fair trial”.

Bettie Jones (55), a mother of five, and college student Quintonio LeGrier (19) were killed early on Saturday by an officer responding to a call that Mr LeGrier was threatening a family member with a baseball bat. Police said Ms Jones was killed by accident.

In Cleveland, some protesters took to social media on Tuesday to ask Cleveland Cavaliers basketball star LeBron James not to play to help pressurise the US department of justice to get involved in an investigation. The team is scheduled to play the Denver Nuggets in Denver on Tuesday night.

Protests are planned at the Cleveland prosecutor’s offices on Tuesday afternoon, and at Chicago’s City Hall on Thursday.

Protests over the shooting of Laquan McDonald led to the resignation of Chicago’s police chief and a US department of justice probe into whether the department uses lethal force too often, especially against minorities.

Mr van Dyke’s case was assigned to Cook County criminal court judge Vincent Gaughan, who also presided over the 2008 child pornography case of singer R Kelly, who was acquitted by a jury. Mr van Dyke’s next hearing is on January 29th. – (Reuters)