Banksy, the English artist who first emerged in the streets whose real identity is unknown, has begun a month-long project across New York City. Banksy will attempt to create a work of art each day in October. Sites are being found via social media. 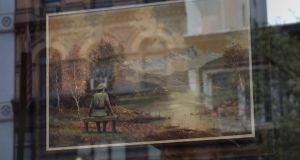 A whimsical painting by elusive British artist Banksy, returned to a New York charity store, sold for $615,000 (€450,000) at on online auction yesterday.

The oil painting was purchased for $50 two months ago from the same shop but Banksy added a man in Nazi uniform to the outdoor scene.

Housing Works, which provides support for homeless patients living with HIV/AIDS, said it received the painting around 11am on Tuesday, when a woman walked into its thrift shop near Gramercy Park to drop off what was then an anonymous donation.

“She said the painting is worth a lot of money and that someone will contact us about it,” said Rebecca Edmondson, director of public relations at Housing Works.

The organization subsequently received a call from the artist’s team, authenticating the work and saying that Banksy would like the painting to be auctioned.

The foundation received a total of 138 bids, according to the Housing Works website.

Titled “The Banality of the Banality of Evil,” the work depicts a man in Nazi uniform contemplating a lake and snowy mountains from a wooden bench. The title echoes Hannah Arendt’s book about the trial of Adolf Eichmann. Human Intervention

The oil painting, minus the human figure, was purchased for $50 two months ago from the same shop. Banksy’s contribution: the Nazi and the signature. The work appears on Banksy’s website.

Housing Works, which operates 12 thrift shops in New York and sells many items in online auctions, placed the painting with Bidding for Good around 6pm on Tuesday.

The painting will be displayed in the window of the Housing Works Gramercy thrift shop through to the end of the auction.

For the past month, Banksy’s provocative images have been appearing on buildings in Bushwick and Coney Island, Brooklyn, and in the Bronx, as well as on the front pages of newspapers.

The artist has been announcing each project on his blog, “Better Out Than In,” which he described as “an artist residency on the streets of New York.”

“Most New Yorkers have been watching pretty closely what he’s been doing for the past 30 days,” Ms Edmondson said. “There has been controversy. But it’s great to end on such a high note by giving back to the New York community.”