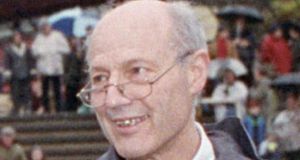 A former Church of England bishop who abused 18 young men over three decades has finally admitted his guilt after a last-ditch effort to throw out his case on the word of a former archbishop of Canterbury failed.

Former bishop of Lewes Peter Ball (83) used religion as a “cloak” to groom his victims when they came to his home in Litlington, East Sussex.

Many were teenagers or in their early 20s when they sought out the bishop - as aspiring priests or with the intention of exploring their spirituality.

Weeks before his trial at the Old Bailey, Ball, who has suffered ill-health but was deemed fit to stand trial, pleaded guilty to misconduct in a public office.

Between 1977 and 1992 he misused his position in authority “to manipulate and prevail upon others for his own sexual gratification” in relation to 16 young men.

Two other counts of indecent assault on a boy of 12 or 13 and a 15-year-old youth were denied and will lie on file.

Earlier this year, Mr Justice Sweeney refused to dismiss the case on a legal technicality after it emerged Ball and former archbishop Lord Carey had been assured in 1993 there would be no future action.

They both believed the matter was closed when Ball accepted a caution for one act of gross indecency and resigned his post, despite police knowing about more complaints.

But in 2012, prompted by a Church of England review, Sussex Police reopened the case and last year charged him with a string of sex offences against teenage boys and young men.

Following his guilty pleas, the church offered an “unreserved apology” to Ball’s victims.

In a statement, Bishop of Durham Rev Paul Butler commended the victims’ “bravery”, saying the church had “provided full co-operation” with the police.

Det Chief Insp Carwyn Hughes of Sussex Police said 12 of the victims had come forward since the investigation was launched.

He said: “It became clear that under the guise of his status as a bishop, Ball had systematically abused the trust of the victims, many of whom were aspiring priests, whilst others were simply seeking to explore their spirituality.

“He abused that trust and used religion, through his Give A Year For Christ scheme, as a cloak behind which to carry out his grooming activity - the principal aim of which was to satisfy his sexual interest in and desire for young men.”

Details of the long history leading to the former clergyman being reinvestigated could only be reported on Tuesday after restrictions were lifted by Mr Justice Wilkie.

On March 5th, 1993, Ball was notified by the Crown Prosecution Service (CPS) that despite “sufficient admissible, substantial and reliable evidence”, it was prepared to deal with the matter out of court.

Ball’s barrister, Richard Smith, suggested the CPS may have settled on the caution to avoid the publicity of a bishop in the dock after discussion “behind closed doors”.

Giving evidence at that hearing, Ball recalled: “After I took the caution I asked very clearly ‘Does this include all other offences of the same nature?’ and I was told very clearly that it did.

“I can remember so clearly I was so glad to get away – to get a guarantee that it was all over.

“That was the last words of the police officer – ‘Bishop, it’s all over’. I was so pleased I went like a rocket down to Cornwall to my brother.”

Lord Carey, who was archbishop of Canterbury at the time, appeared to back up his claim in his recollections of the incident, which were read out in court.

On hearing the news of Ball’s caution, he wrote: “I was troubled. I did not think this was good enough. I wanted some form of assurance.

“All we had was the resignation of Bishop Peter. I was worried that if any other allegations of past indecency were made it would reignite. I wanted some reassurance that this would not be the case.

“I was so troubled, that evening after dinner I went to my study. I was supplied with a number of a man at the CPS I believed to be a director. I do not recall his name.

“I rang him and asked what might happen if allegations from the past were made. I was told quite categorically that the other allegations would not be taken further as far as we are concerned. [Ball] has resigned. [Ball] is out of it. The matter is closed. We are not going to take anything any further.”

The defendant also claimed that a promise to resign from his post was a condition of the police caution, even though he later explored the possibility of being allowed back to work.

Mr Justice Wilkie remanded him on bail to await sentencing on October 7th.

Ball was bishop of Lewes between 1977 and 1992 and bishop of Gloucester from 1992 until his resignation the following year.

He was said to have many high-profile friends and acquaintances, including the Prince of Wales.