David Cameron: no second referendum if UK votes for Brexit 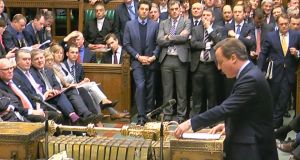 Prime minister David Cameron addresses MPs in the House of Commons in London, to lay out his case for staying in the European Union. Photograph: PA Wire

David Cameron has ruled out a second referendum on Britain’s EU membership, ridiculing the idea that a vote to leave could be a prelude to negotiating a better deal.

Addressing the House of Commons on the outcome of last week’s summit in Brussels, the prime minister made a pointed attack on London mayor Boris Johnson, who claimed yesterday that “all EU history shows that they only really listen to a population when it says no”.

Mr Cameron said that if Britain votes to leave the EU, it would be wrong and undemocratic for the government to do anything other than begin the process of leaving.

If no agreement is in place at the end of that period, then exit is automatic unless all other EU member-states agree to a delay.

“And we should be clear that this process is not an invitation to re-join. It is a process for leaving,” Mr Cameron said.

Although he did not mention Mr Johnson by name, there was no doubt about the target of the prime minister’s remarks, which earned him loud cheers from the Labour benches.

Towards the end of his statement, Mr Cameron took a further swipe at the London mayor, who has been accused of political opportunism in his decision to back Brexit.

“I am not standing for re-election,” the prime minister said. “I have no other agenda than what is best for our country.”

The pound suffered its biggest falls in seven years following Mr Johnson’s decision to join the Leave campaign, which also prompted bookmakers to cut the odds of a Brexit.

The rating agency Moody’s warned that economic costs of leaving the EU would outweigh any benefits. It warned that Brexit could damage Britain’s credit rating and lead to a “prolonged period of uncertainty”.

The prime minister said he would make the positive case for Britain remaining in the EU, but he insisted that it was also necessary to point out the risks of leaving.

“It would be irresponsible not to put before the British people what the consequences of the outcomes are,” he said.

However, Mr Corbyn criticised the deal agreed in Brussels as serving the interests of the City of London and penalising low-paid workers moving to Britain from central and eastern Europe.