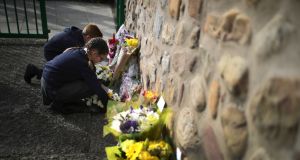 Wales fell silent at 9.15am on Friday, exactly 50 years after 116 children and 28 adults were killed after thousands of tonnes of slurry and coal waste engulfed Pantglas junior school in Aberfan.

Survivors of the disaster who had been pulled from the rubble, along with families who had lost children, joined dignitaries including Prince Charles at ceremonies today in the village.

Among the survivors was Gaynor Madgwick, whose brother Carl and sister Marilyn died in the disaster.

Ms Madgwick has written vividly about the tragedy and is prepared to talk in detail about it, but said she felt “washed out” by the emotion of this particular anniversary.

“It is different,” she said. “The amount of attention we’ve received has made it more intense for me.”

The media attention that surrounds the visits of royalty and government ministers would not be here next year, Ms Madgwick said. “But we’ll still be here. We were here for the 49th anniversary, and we’ll be here for the 51st. I’ll be coming here until the day I die.”

Lynne Rees (49), was not yet born when the tragedy struck. But she cannot remember a time when she did not know that her sister, Janette Brown, had died aged 10 in the disaster. “I think it’s so important that we do remember,” she said.

There was a time when the schools did not talk much about what happened at Aberfan. Nowadays, teachers make sure children know what happened on October 21st, 1966.

It may be one reason that the memorial garden at Aberfan – laid out to echo the footprint of the school – never now suffers any vandalism. This is not a place for hanging around and causing mischief.

Along with the main commemorations centred on the garden, cemetery and churches, some smaller-scale events were taking place.

For example, the pupils of Afon Taf high school were dropping 116 flowers into the river and letting them float downstream to Aberfan. Year 11 at the school happens to have 116 pupils, and each will wear a badge bearing the name of one of the lost children.

Aberfan was one of the first televised disasters, and the awful images were beamed around the world. Over the past few days, visitors from South Africa, the US and Australia have arrived to visit the memorial garden and the cemetery with its rows of bright white memorials to the children that can be seen from miles away.

The minute’s silence was, no doubt, being observed in pockets around the globe.

The tragedy happened on the last Friday before half-term. As ever, many of the children had stocked up on goodies from Anderson’s sweet shop on the way to Pantglas (which translates as Green Hollow) school.

At assembly they sang All Things Bright and Beautiful and were settling down to their lessons when they heard a gathering, rumbling sound. Then the avalanche of thousands of tonnes of slurry, coal waste and tailings rolled over the school and a row of houses.

Family members, shopkeepers and office workers were the first to dig, with garden tools and their hands. The emergency services, miners and soldiers dashed to help.

The survivors who were trapped in the school had no idea at the time what had happened. Later they learned that Merthyr Vale Tip No 7, destabilised by springs the children used to play in on hot days, had slid down the mountainside.

Villagers had warned the state-owned National Coal Board that the tip could be dangerous and been fobbed off. At the inquiry that followed, the NCB’s lawyers argued the collapse was caused by a “critical geological environment” and the disaster was not foreseeable.

But Aberfan never swallowed that line. One father stood up during an inquest after the cause of his child’s death had been given as asphyxia and multiple injuries and declared: “No, sir, buried alive by the National Coal Board. That is what I want to see on record.”

The 50th anniversary has caused commentators to think again about the disaster, the aftermath and the poor response of the NCB.

In the House of Commons, Theresa May said those in power at the time were “not willing to step up to the plate initially and to accept what had actually happened”. Harold Wilson’s Labour was in power at the time, and the Labour politician Alf Robens was chair of the NCB.

Aberfan’s raison d’être in the 1960s was coal. It created a vibrant economy – there was full employment – and a feeling of solidarity, community, comradeship. But extracting it was dangerous. Across the valleys, families still mourn adults who died underground. Here coal cost the lives of children too.

The first minister of Wales, Carwyn Jones, said the people of the valleys knew the dangers of mining and the health problems it caused. “They knew the price of coal was high,” he said. “They didn’t realise it could be so extortionate.”

Plaid Cymru’s leader, Leanne Wood, said the events before and after the disaster had changed the close-knit community forever.

“The lives of an entire generation in the village were extinguished before they reached their prime. A whole generation of adults and grandparents were denied the chance to see their children grow up, she said.

“Even half a century on, the facts of the Aberfan disaster are no less shocking, and resonate throughout Wales.”

Ms Wood said the people of Aberfan should be commended for the dignity and bravery they had shown since the disaster. “They endured unimaginable sorrow but maintained a community spirit and built a support network within the village which helped get each other through their ordeal.”