US and Russia agree to enforce new Syria ceasefire

Ceasefire, subject to agreement between warring parties, to take effect on Saturday 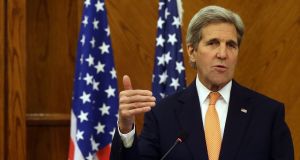 A new deal between the US and Russia to enforce a ceasefire in Syria has been reached, with the cessation of hostilities set to come into force on February 27th.

The ceasefire, subject to the agreement between the warring parties, would exclude Islamic State, al-Nusra Front and other groups deemed to be terrorist organisations.

Scepticism about whether it can be enforced will be widespread after a previous planned ceasefire failed to take place. Instead, Russia continued its bombing campaign, sieges of starving towns were never lifted, and other confidence-building measures ignored.

But the joint statement by Russia and the US would not have been issued on Monday following extensive talks unless the two countries had relatively clear indications that its terms will be accepted by the key players. These include the Syrian government and opposition forces sponsored by Saudi Arabia and by Syrian Kurds.

In a change to the previous aborted ceasefire, the two superpowers have agreed to act as direct guarantors and monitor the cessation of hostilities

In a joint statement, Russia and the US said cessation of hostilities would begin at midnight on February 27th Damascus time. Parties to the agreement are required to indicate acceptance by noon February 26th.

Key to the agreement issued on Monday will be co-ordination between Washington and Moscow to set out territories subject to the ceasefire, and therefore must not be subject to aerial bombing by Russia or attacks by the Syrian army and the US-backed opposition.

The likelihood remains high that either artillery fire or aerial bombardment will deliberately or inadvertently land in territory party to the ceasefire.

The agreement states that violations will be reported on a hotline to a special task force co-chaired by the US and Russia. The task force will have power to determine a group can no longer be deemed party to the agreement, and so once again open to military attack.

All opposition groups signing up to the ceasefire will not only cease to use weapons or to gain territory, but also allow “rapid safe and unhindered” access to humanitarian convoys in areas under their control.

The joint statement also states that “all parties further commit to work for the early release of detainees, particularly women and children”.

John Kerry, the US secretary of state, called the agreement “a moment of promise”.

“I am gratified to see the final arrangements concluded today for a cessation of hostilities in Syria,” Mr Kerry said, “and call on all parties to accept and fully comply with its terms.

“If implemented and adhered to, this cessation will not only lead to a decline in violence, but also continue to expand the delivery of urgently needed humanitarian supplies to besieged areas and support a political transition to a government that is responsive to the desires of the Syrian people.”

The previous ceasefire, agreed by the International Syrian Support Group at the Munich security conference, was due to have to come into force last Friday, but the United Nations had to abandon the plan.

In the interim the Russian- backed Syrian army loyal to president Bashar al-Assad has made territorial gains nearly encircling Aleppo.

Moscow’s calculation may be that Mr Assad has so strengthened his military hand with the help of its air force that he is now in a strong enough military position from which to conduct negotiations about the composition of s future government.

These negotiations would include Mr Assad’s own personal role and future elections.