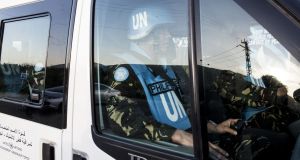 UN peacekeepers held by rebels for several days in southern Syria and freed at the weekend crossed into Israel from neighbouring Jordan last night, a military spokeswoman said.

The spokeswoman would not comment, however, on a report by an Israeli newspaper that Israeli troops had later escorted the 21 Filipino peacekeepers back to their base along the Syrian frontier with the Golan Heights, which are occupied by Israel.

The peacekeepers, part of the UN Disengagement Observer Force (UNDOF) that has monitored the ceasefire line between Israel and Syria since 1974, were released on Saturday by rebels fighting to topple Syrian president Bashar al-Assad and taken to Jordan.

The men had been held in the village of Jamla, some 10km from the Jordanian border with Syria. The Un ited Nations said they had been captured by 30 rebel fighters.

"I can confirm that they came into Israel today, from Jordan," the Israeli spokeswoman said of the freed peacekeepers.

It was not immediately clear why the peacekeepers would end up in Israel, but, logistically, it would be safe for them to return to their main command post via Israel.

The spokeswoman refused to comment on the report on the Maariv newspaper's website that Israeli soldiers had escorted the Filipinos by bus from the Jordan border region to their base in the Golan.

The paper said that Israel, already worried about Syria's two-year civil war spilling across its border, was also concerned that the incident with the peacekeepers might lead member countries to pull troops out of UNDOF.

The peacekeepers have helped monitor an enduring though often tense agreement brokered by the United States in 1974, under which Israel and Syria are allowed a limited number of forces within 20km of a disengagement line in the Golan.

Israel captured the strategic Golan plateau from Syria in a 1967 war and later annexed the territory.

There have been a number incidents in which shells from Syria's civil war have landed in Israel since November, the latest as recently as Saturday. None have caused any casualties.