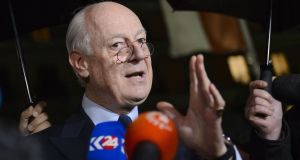 UN Syria envoy Staffan de Mistura during a press briefing in Geneva, where he announced a “temporary pause” until February 25th of talks aimed at ending the civil war. Photograph: Fabrice Coffrini/AFP/Getty Images

UN-mediated talks to end the war in Syria are on pause until February 25th, UN envoy Staffan de Mistura said on Wednesday, saying the talks had not failed but needed immediate help from international backers led by the United States and Russia.

“I have concluded frankly that after the first week of preparatory talks there is more work to be done, not only by us but by the stakeholders,” he told reporters after meeting the opposition delegation at their hotel in Geneva. “I have indicated from the first day that I won’t talk for the sake of talking,” he said.

As the UN struggled to save the talks, Damascus and its Russian allies said they had seized territory in fierce fighting and rifts widened among embattled rebel factions.

The Syrian army said its forces had broken through rebel defences to reach two Shia villages in Aleppo province which had been besieged for three years. Rebels said the breakthrough came after hundreds of bombing raids by Russian warplanes.

Aleppo factions, reeling from an “unprecedented” onslaught, issued an ultimatum to the opposition delegation late on Tuesday at the Geneva talks late on Tuesday, a source close to the talks said.

Mr de Mistura announced the formal start two days ago of the Geneva negotiations, the first attempt in two years to negotiate an end to a war that has killed 250,000 people, driven a huge wave of refugees and empowered Islamic State.

One commander said opposition-held areas of the divided city were at risk of being encircled entirely by the government and allied militia, and appealed to foreign states that back the rebels to send more weapons.

“How can you accept to enter negotiations when you have unprecedented military pressure? The Russians and regime want to push the opposition out of Geneva so the opposition bears the responsibility for the failure,” said a senior western diplomat.

Russian foreign minister Sergei Lavrov said his country had no intention of ending its campaign.

“Russian strikes will not cease until we really defeat terrorist organisations like [the al-Qaeda-linked] Jabhat al-Nusra. And I don’t see why these air strikes should be stopped,” he said at a news conference in Oman’s capital Muscat.

Diplomats and opposition members said they were taken by surprise when Mr de Mistura called for immediate efforts to begin ceasefire negotiations despite there being no official talks or goodwill measures from the Syrian government.

The opposition has said it will not negotiate unless the government stops bombarding civilian areas, lifts blockades on besieged towns and releases detainees.

The Syrian Observatory for Human Rights, which monitors the violence in the country, said Russian and Syrian warplanes launched dozens of strikes on the rebel towns of Hayan and Hreitan in northern Aleppo on Wednesday.

“We’re appalled that the regime seems to view humanitarian access as a topic for debate at the talks in Geneva,” the official said, stressing that the UN Security Council already called for an immediate end to attacks on civilians.

UN secretary general Ban Ki-moon called for “a strong show of solidarity” at a conference in London on Thursday on humanitarian aid for Syria.

“We have at least 400,000 people stranded in besieged villages,” he said, adding that only a tiny percentage were receiving aid. “It is very difficult for us, very dangerous.”