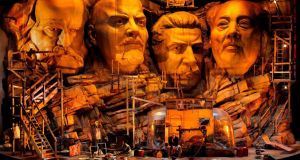 The knives came out again for the premiere yesterday of the new production of Richard Wagner’s Ring cycle at Bayreuth.

Richard Wagner’s descendants are celebrating his bicentennial at Bayreuth in fine festival tradition: with a row. After cutting a birthday cake to the composer on Thursday, the knives came out again for the premiere yesterday of the new Ring cycle. Film director Wim Wenders agreed to helm the anniversary production then pulled out. His replacement: Frank Castorf, the ageing enfant terrible of Germany’s theatre world notorious for his drastic rethinks of classic plays.

Ahead of yesterday’s premiere, Mr Castorf complained that the tight Bayreuth rehearsal schedule was more suited to a soap opera than 17 hours of grand opera.

As for the Wagner crowd in Bayreuth, the East German-born director sniffed: “Everyone from outside is the enemy, it’s pure GDR.I’m not even sure I would call myself a a big Wagner fan,” the 62-year-old director confided to Der Spiegel

A further source of rehearsal tension, according to Bayreuth insiders, was a machine gun demanded by Castorf but criticised by conductor Kirill Petrenko as too loud. “It’s not the 19th century where women faint en masse at little things like this,” said Mr Castorf, before agreeing to use quieter stage ammunition.

Critical reception
Katharina Wagner, great-grand daughter of the composer, did her best to keep her prickly director happy. Her future in Bayreuth depends on the critical reception to his Ring: a critical flop could bring the curtain down on her, and her cousin Eva’s, reign as Bayreuth’s creative director team. Yesterday was the premiere of Castorf’s Rhinegold: no longer a sing-off between dwarves, gods and giants for the gold of the Rhine – but for oil.

The Valkyrie, part two, is set in the oil fields of Azerbaijan while the final opera, Götterdämmerung shifts to Wall Street. The third opera in the cycle, Siegfried, premieres on Monday with a colossal revolving set by Serbian designer Aleksandar Denic.

On one side is Berlin’s Alexanderplatz, on the other a communist Mount Rushmore featuring the faces of Marx, Lenin, Stalin and Mao. “The set is breathtaking but no one knew what it was supposed to mean,” said Benjamin Stahl, a Bayreuth first-timer, who watched the Siegfried dress rehearsal from the VIP – formerly Führer –box.

“It seemed to be a capitalism critique but left people confused – not good direction in my book.” After a long evening – six hours including intervals – he added: “At least our VIP seats were upholstered.”