A populace weary of harsh austerity has chosen to change direction 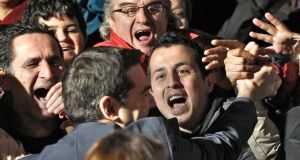 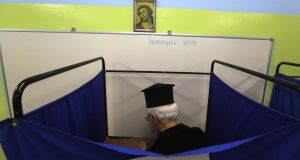 A Greek orthodox priest casts his vote inside a polling booth in an elementary school in Athens. Photograph: Yannis Behrakis/Reuters 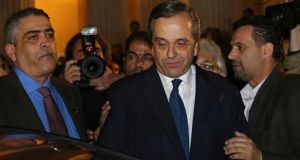 In a chant that conveniently rhymes in Greek, his fans shouted “Greece, Greece, Antonis Samaras” as the smiling leader made his way into the grand surroundings of Athens’s 19th-century Zappeio conference centre to concede defeat in Greece’s general election.

“The Greek people have spoken and we respect their decision,” Greece’s prime minister Antonis Samaras said, as he recounted what he described as his main achievements.

“I’m handing over a Greece without deficits, which is member of the euro zone and the EU. I hope the next government keeps it that way.”

But that record didn’t fly with voters, as they used the chance presented by a snap election to put Samaras’s anti-austerity opponent Alexis Tsipras and his Syriza party on the cusp of an overall majority in Greece’s new parliament.

In Corinth, about an hour southeast of Athens, Eleni and her husband Yiorgos explained why. Struggling to survive on the €380 a month they have left after paying their rent, they said Greece needs an end to austerity and Syriza was the only party offering change.

Voting was brisk from early morning at Corinth’s central primary school. At polling station number 67, about one-sixth of the 590 registered voters had cast their ballots by 11am, according to officials.

The choice between the parties was an easy one, most people said when asked, with seasoned voters, in particular, coy about disclosing their voting patterns, like Yiannis (77), a retired engineer.

“I voted for a party I never voted for before. It was an easy decision, one I did with a clear conscience as I was terribly disappointed with the previous government,” he said, smiling when pressed if he voted for Syriza.

While it wasn’t her first time to vote for Tsipras, 20-year-old Mariangela admitted it was still a difficult choice.

“It wasn’t an easy decision as I don’t think there’s much hope, especially for the youth. New Democracy had its chance and they made things worse. Now it’s Syriza’s turn, even though I’m not sure it can do much,” said the maths student, who had spent €60 travelling from the island of Samos where her college is. She said the expense was necessary and worthwhile. “I’m an active citizen. It’s my right to vote and I wouldn’t miss it for anything.”

Other Syriza voters spoke of the need to punish those who they believed were responsible for Greece’s crisis. “Our minds won’t rest until Samaras and Papandreou are in jail,” said 35-year-old Dimitris, referring to previous prime ministers, his friends Vlassis and Emilios nodding in agreement.

Not everyone could make the leap towards Syriza, however. As she exited the polling station with her son, Nektaria (40) readily revealed how she voted.

“I stuck with the same party, New Democracy, which is following the only path open to us. There is simply no other way and a Syriza government will be catastrophic.”

In the last election, New Democracy took three of the constituency’s four seats, with the final one going to Golden Dawn, despite it coming in fourth place after Syriza and Pasok.

Showing his face in the hope of attracting a few more votes, one of the outgoing New Democracy MPs grappled with his mobile phone as he shook the hands of well-wishers.

“I’m always there for you, you know that,” Kostas Kollias spoke down the phone, before turning to this reporter. “Yes, it’s been a struggle, not for me personally but for our party,” he admitted.

With more of a spring in his step as he did a tour of the polling stations, one of Syriza’s election hopefuls, Thodoris Vasilakopoulos, said he was feeling confident.

“My impression is positive, but you know the way it is. The voters don’t always tell you the truth.”

“Some guys from Golden Dawn were here earlier, but they didn’t hang around. They don’t like to show their faces these days,” a Syriza election observer noted.