Syriza tipped to win Greek election – but no majority 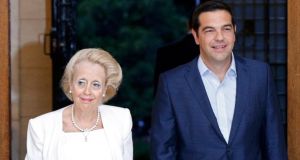 Former Greek prime minister Alexis Tsipras’s leftist Syriza party will emerge as the biggest party in next month’s election but without the majority it was hoping for, the first opinion polls since he resigned last week showed.

One found that almost two- thirds of voters felt Mr Tsipras should not have sought a fresh mandate, while both surveys showed his favoured coalition ally would not make it into parliament.

That suggested his gamble to call early elections scheduled for September 20th to consolidate his power base could backfire, though in one of the polls over a quarter of voters remained undecided, making the final outcome far from clear.

Syriza was supported by 23 per cent of those polled by ProRata for Friday’s Efimerida Ton Syntakton newspaper, with New Democracy second on 19.5 percent. The previous ProRata poll in early July showed Syriza on 26 per cent compared with 15 per cent for New Democracy.

Mr Tsipras remained the most popular political leader with 41 per cent of voters having a positive or very positive view, with New Democracy leader Vangelis Meimarakis not far behind with 34 per cent, according to ProRata.

But 64 per cent of Greeks said they believed Mr Tsipras’s move to call snap polls was wrong, while 68 per cent agreed Greece must stay in the euro zone at any cost, even if that meant further austerity.

“The answers to these two questions lead to the conclusion that early elections may cost the [former] prime minister and Syriza,” the newspaper said.

The latter include George Chouliarakis, who was part of Greece’s bailout negotiating team under Syriza, as interim finance minister.

An ally of the former deputy prime minister Yannis Dragasakis, Mr Chouliarakis took a decisive role in the talks in the summer and his appointment is likely to be seen as a positive for keeping the country’s bailout programme on track.

“The basic goal is continuity so that precious time is not wasted. There has to be progress on the issue of reinforcing the Greek banking system as quickly as possible,” Mr Chouliarakis said at the handover ceremony.

The head of the council of euro zone finance ministers, Jeroen Dijsselbloem, urged the interim government to continue preparations to implement the bailout in the run-up to the election and said Mr Chouliarakis “knows what he’s doing”.

Popular Unity, the party formed last week by Syriza rebels who oppose the bailout, was backed by 3.5 per cent in the ProRata poll – above the 3 per cent threshold needed to enter parliament – and 4.1 per cent in the poll by Metron Analysis.

Mr Tsipras this week ruled out co-operating with the main pro-euro opposition parties – New Democracy, the Socialist Pasok and the centrist To Potami. The polls suggest in that event the country would face a second round of elections.

Still, with Syriza’s move to accept the EU/IMF bailout, the next parliament will continue have a substantial majority of pro-bailout parties, meaning the country’s future in the euro zone looks more secure than it did at the start of the year.

One-third of those who supported Mr Tsipras’ party in the January 2015 elections that took him into office said they were unsure if they will do so again, the ProRata poll said. – (Reuters)