Somalia says hundreds may have drowned in Mediterranean

Italian President Sergio Mattarella says Europe needs to reflect in the face of 'yet another tragedy in the Mediterranean', in which he says hundreds appear to have died. Video: Reuters 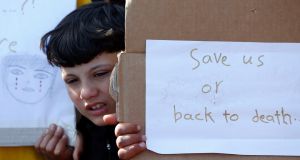 A migrant boy shouts slogans near a banner reading “Save us or back to death” during a demonstration on a rail tracks at the northern Greek border point of Idomeni, Greece on Monday. Photograph: Amel Emric/AP

Somalia’s government said on Monday about 200 or more Somalis may have drowned in the Mediterranean Sea while trying to cross illegally to Europe, many of them teenagers, when the boat they were on capsized after leaving the Egyptian shore.

Italian president Sergio Mattarella had said earlier on Monday that several hundred people appeared to have died in a new tragedy in the Mediterranean, after unconfirmed reports spoke of up to 400 victims of capsizing near Egypt’s coast.

More than 1.2 million African, Arab and Asian migrants have streamed into the European Union since the start of last year, many of them setting off from North Africa in rickety boats that are packed full of people and which struggle in choppy seas.

“We have no fixed number but it is between 200 and 300 Somalis,” Somali Information Minister Mohamed Abdi Hayir told Reuters by telephone when asked about possible Somali deaths in the latest incident.

Another Somali government statement, which offered condolences, put the number at “nearly 200”, saying they were mostly teenagers. It said the boat they were on had capsized after leaving Egypt.

“There is no clear number since they are not travelling legally,” the minister said, adding that he understood the boat might have been carrying about 500 people, of which 200 to 300 were Somalis “and most of them had died”.

He did not give a precise timing for the incident.

One year ago, an estimated 800 migrants drowned off the Libyan coast when the fishing boat they were travelling in collided with a mercantile vessel that was attempting to rescue them - the most deadly Mediterranean shipwreck in decades.

Egyptian, Italian and Greek officials had earlier been unable to confirm the report of a new sinking.

A UN refugee agency official told Swiss broadcaster SRF he knew of 40 survivors from what appeared to be the same incident.

“We know there are 40 survivors and that as many as 460 people may have been on the boat who sailed from Egypt,” the UNHCR’s Beat Schuler told the broadcaster in what it said was a report from Malta.

In an article on the Somali National News Agency (SONNA) website, President Hassan Sheikh Mohamoud on Monday “sent his heartfelt condolence on his behalf and on behalf of the citizens of Somalia to the families who lost their loved ones”.

The president urged Somalis to stand together in helping “stop such hazardous trips to overseas”.