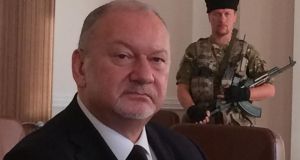 If John le Carré were to visit the pseudo-statelet run by Russian-backed rebels in eastern Ukraine, he might feel oddly at home with Vladimir Antiufeyev.

The onetime British agent in le Carré would recognise a fellow survivor of the cold war’s shadow games, and the great spy novelist would glimpse some of his characters in the mysterious Siberian veteran of the Soviet security services.

Antiufeyev arrived secretly in eastern Ukraine early this month before being named deputy prime minister in charge of security affairs for the separatist Donetsk People’s Republic. This week he became its acting prime minister, when incumbent Alexander Borodai went home to Moscow for “consultations”.

Antiufeyev (63) was a top security official in Latvia when it broke with the Soviet Union, and a leader of pro-Moscow forces who tried to crush the independence movement with deadly attacks on protesters in Riga in January 1991. He says he fled Riga for Moscow two hours before he was arrested, and was invited soon afterwards to establish the security services of Transdniestria by Kremlin-backed rebels who sought to split the region from Moldova. There – under the pseudonym Shevtsov – Antiufeyev for 20 years crushed dissent as head of the local KGB, backed hard-line leader Igor Smirnov and linked the isolated, unrecognised republic with its friends and financiers in Russia.

During an interview in rebel headquarters in Donetsk, Antiufeyev revealed that he also worked on security issues in South Ossetia and Abkhazia, Russian-backed breakaway provinces of Georgia, and “did [his] duty” in Crimea when Russia annexed Ukraine’s Black Sea peninsula this year.

He would not give details about his work in any of those regions, but said he had been based in Moscow since 2012, mostly working on “private” matters, after backing the wrong horse during political changes in Transdniestria.

It is hard to believe an operator as experienced and well connected as Antiufeyev simply made a political miscalculation, but he insists he played no role in planning the insurgency that has claimed hundreds of lives in eastern Ukraine.

With the wry smile that often plays on his lips, Antiufeyev said his resumé “gave someone grounds to think of me” when groups in Donetsk and Luhansk regions – allegedly organised and supplied by Moscow – took up arms against Ukraine’s new pro-western leaders.

“Certain people – it doesn’t matter who – thought I have the appropriate experience in fighting national fascism,” said Antiufeyev, who is still a wanted man in Latvia and Moldova and is persona non grata in the European Union.

“Russia was a guarantor of the territorial integrity of Ukraine, but Ukraine did not take that into consideration when it began military actions against the Russian-speakers in the country,” said Antiufeyev.

“Ukraine is an artificial country, and in its current form it has not stood the test of time. There are contradictions between its territorial and ethnic make-ups, which always existed and reasserted themselves when the state became weak.”

Showing disdain for Ukrainian statehood that is common in Russia, Antiufeyev added: “Its ambitions are not in accordance with its possibilities . . . Ukraine did not use the opportunities it was given by history.”

With frequent reference to fairytales and folk sayings, Antiufeyev claimed largely Russian-speaking parts of Ukraine that were known as “Novorossiya” in Tsarist days were rejecting Kiev’s tilt to the West and seeking Moscow’s help.

“But Russia cannot make this happen – this is the people’s will,” he said, of a rebel movement that in fact does not have overwhelming public support in the east.

“People awaited the arrival of Russian forces as liberators. They are still waiting . . . But I think Russia will find other ways of establishing peace here.”

Antiufeyev, like the Kremlin, sees Ukraine’s revolution as the latest phase in a decades-old US project to weaken Russia and poison its relations with Europe.

He denies suggestions that he is taking orders from colleagues in Russia’s security services, however.