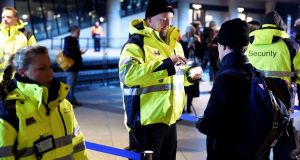 It’s a freezing but sunny morning in Copenhagen and a queue has formed at the information desk of the redbrick central train station.

The woman on the desk has fielded so many queries on getting from the Danish capital to nearby Malmö in Sweden that, when I ask how many, she flashes a grim smile and opens her hand to reveal a mechanical counter inside: 77 queries in the past 50 minutes.

Downstairs, a train departs platform five and sets off into a new reality. A few minutes later, at Copenhagen’s Kastrup airport station, a friendly but harrassed conductor announces: “Please be aware that this train ends here and no longer goes to Sweden.”

It’s been an unhappy new year for the thousands of people here who live in Malmö and work in Copenhagen, zipping daily across the Øresund Bridge.

The bridge was opened in 2000 as part of a 12km road and rail link between the two cities. It is a triumph of both engineering and politics, a cornerstone of an integrated European ideal of free movement. But that freedom, taken for granted by people here, is now crumbling under the strain of the migration crisis.

If the EU falls apart under that strain, future historians may trace back structural cracks to January 4th, 2016.

From Monday, a new Swedish law obliges transport companies to ensure that all people they bring into the country have proper ID. Those checks have interrupted the once effortless journey from Copenhagen to Malmö.

Rather than pass through Copenhagen airport as before, you now have to leave one train, go upstairs to the station, then down again to wait for another train. Separating the two is a wire fence, mounted hastily between the two tracks in lumps of concrete.

On the freezing platform, Danish rail (DSB) spokesman Tony Bispeskov oversees 34 security queues and 150 security staff. They use smartphones to photograph and store the IDs of about 18,000 people who use this line daily. No ID, no travel.

The new security measures imposed by Sweden are costing Denmark’s state-owned DSB the equivalent of €134,000 a day, he adds. It is still unclear what costs arise from the 30 minutes lost daily by each passenger, let alone the trade consequences.

As the train pulls out, Swedish woman Lisa fumes at the “stupidity” of her government’s measures. “You can still fly from Denmark to Sweden without an ID. This bridge check is ridiculous and just inconveniences ordinary people.”

Waiting on the platform in Malmö, Dutch couple Jacqueline and Wijnand, from Eindhoven, have mixed feelings.

“Where we live in the Netherlands we are used to free travel across borders, but we understand that it makes it difficult for countries to control movement properly, necessary at a time like this,” says Jacqueline.

Heading back to Copenhagen a few hours later, as winter sun is setting over the sea, it’s hard not to wonder if the sun has set, too, on the Schengen free movement area. Not even the magnificent Øresund structure could bridge the vast, and growing, gulf between Sweden and Denmark on migration.

While Sweden has accepted 160,000 asylum seekers in 2015, Denmark, traditionally more restrictive on migration, took in 21,000.

Stockholm has defended its restrictions as a consequence of unfair EU sharing of the migration burden. On Monday, 12 hours after the Swedish rules kicked in, Denmark retaliated.

Centre-right prime minister Lars Løkke Rasmussen announced temporary controls on Danish borders – a consequence, he said, of similar measures in Norway, Sweden and Finland. To prevent Sweden-bound asylum seekers being stranded in Denmark, Copenhagen had stepped up spot checks, directly on its borders.

The new rules are less drastic than Swedish measures, something Danish officials say reflects the importance they attach to free movement.

“We should make every effort to avoid the same chaos and problems that the new Swedish rules can cause,” said Rasmussen.

While Danish officials said they hoped to be able to roll back the measures soon, Rasmussen warned that Denmark would, if necessary, demand Swedish-style ID checks from transport companies, even at short notice.

“Of course I do not hope that Schengen dies today,” said Inger Støjberg, Denmark’s minister of integration. “But I think everybody is aware that we are under pressure.”

Back at Copenhagen’s airport train station, the rush-hour commute has begun. Passengers hurry down the travelator to catch the waiting train, but the ID scan robs them of precious seconds. The doors slam and the trains – running half as frequently on Monday as before – pull away without many passengers, including Susan Flygenring.

“This is horrible. I feel like crying. I really needed to get that train,” says Flygenring (37), who works in Copenhagen and lives in Sweden.

For her the Øresund bridge was a lifeline and a promise, allowing her to juggle work and family in two different European countries. But the growing tensions migration has put on European freedom of movement means, for her, uncertainty about her way of life.

“We used to be so free going back and forth between Sweden and Denmark. Now we need a passport,” she says. “This isn’t what we were promised.”