Potsdamers’ dance to music of time brings back Prussian past 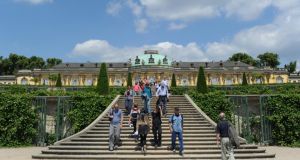 On a mild Saturday night in Potsdam, a hundred people are dancing in a circle outside Prussian King Frederick the Great’s Sanssouci palace. As a baroque melody echoes around the curved colonade, the smiling strangers concentrate on their twirls and bows as they are drilled in the art of court dancing.

The dance mistress and a few in the crowd are in historical costume – silk gowns, breeches even the odd powdered wig – but most of the older crowd are either in rain jackets or various shades of beige. We’re at the annual Palace Evening, attracting almost 30,000 people to enjoy a drink, readings and music in the former royal park.

The 300-hectare space, roughly half the size of Dublin’s Phoenix Park, is like a housing estate of Prussian palaces. Just when you think you’ve seen them all you turn a corner and encounter another: vast and pompous like the New Palace, or low-slung and more modest like the yellow palace of Sanssouci – French for without a care. Potsdam was imperial Berlin’s Versailles or Windsor, where Frederick the philosopher king liked to make music, plan wars and muse with Voltaire. At the park’s old windmill, blades turning steadily in the still night air, half a dozen men gather bearing the white and black Prussian flag. It’s an odd sight considering that Prussia, the linchpin of the first German Reich, was abolished in 1947.

Marco Schönberger, the group’s leader, doffs his three-cornered hat and shows off his iron cross medal. “We’re not far-right or anything, we just like this chance to celebrate Prussia’s positive legacy,” he said. “It wasn’t all wars and militiarism; it was a very progressive state, too.”

On nights like this Potsdam seems far away from Berlin, 40km to the east, and decoupled entirely from the surrounding state of Brandenburg. It inspired Bach’s famous concertos and several travel volumes by Effi Briest author Theodor Fontane. More recently cabaret singer Rainald Grebe’s vicious cabaret ode to “Brandenburg” mocked the state for being so depopulated that “three neo-Nazis stand on a hill and find no one to beat up”.

Almost the size of Ulster and Connacht combined, with just 2.4 million people, Brandenburg’s vast Lausitz area, where wolves once again roam wild, is a world away from Potsdam. When East Germany’s 14 districts – 15 if you include East Berlin – were merged into six “new” Länder or federal states in 1990, Potsdam was made Brandenburg’s capital.

The town is booming, its population is growing and many millionaires – modest industrialists, reedy quizshow hosts, leather-faced fashion designers – have moved here rather than to Berlin, settling into expensive piles on surrounding lakes.

While Berlin pitches itself as “poor but sexy”, Potsdam is rich and becoming more Prussian by the day. For centuries Brandenburg was the home of the Hohenzollern family, and nucleus of their latter Prussian empire.

In East German times much of that historic vista was obliterated. Now the East German architecture is vanishing in favour of Prussian reproductions. The pinnacle of this trend lies across the river Havel from the main train station, a pink and grey facade palace that looks centuries old but opened its doors just last January.

Brandenburg’s state parliament or Landtag is a replica of the Prussian royal original from 1751, bombed in the second World War and torn down in 1960.

As in Berlin, where the Prussian palace eradicated by East Germany is currently being rebuilt, Potsdam locals are in disagreement over whether rebuilding their new, old palace corrects an act of architectural vandalism or marks a worrying embrace of revisionist kitsch.

Brandenburg politicians eventually backed the plan and the finished building – a public-private partnership – was opened to the public in January after just three and a half years’ building and with a price tag of €119.7 million. Architect Peter Kulka has performed a remarkable conjuring trick. Outside is a historic facade that replicates the original, though with many simplifications. In a surrealist nod to Magritte, a sign on the outside wall announces: Ceçi n’est pas un château — this is not a palace. Step inside and you see why: a stark modern interior in white and red, the Brandenburg state colours, that looks less like a private clinic or even a film set. With its contrasting exterior and interiors, Stanley Kubrick could have filmed both 2001 and Barry Lyndon here.

“I used to pass the original palace every day during the war and it was a grey and miserable place,” said 81-year-old Dolly Radusch, one of 120,000 enthusiastic visitors since January. “It’s wonderful to see it back now, better than ever. They should start work now on the Garrison Church.”

The former royal church was demolished too by the East German regime and a campaign is under way to rebuild it. Supporters call it another missing piece in Potsdam’s Prussian puzzle, but opposition is growing. Opponents call it a waste of money to rebuild a structure tainted since Hitler’s infamous “Day of Potsdam” on March 21st, 1933. On that day the dictator used the city, and the church, to present Nazism as the supposed successor to the Prussian past.

“We wouldn’t tear the church down if it was still there but it’s gone and Potsdam has more urgent things to spent its money on,” said Mr Lutz Boede, a local independent councillor. “There is a vocal group of people in Potsdam who want to eradicate East Germany from the cityscape and turn back the clock with this revenge architecture.”

A quarter century after the Berlin Wall fell, Potsdam faces a curious dilemma: to recall your city’s past in the future, how far do you go? Back at the Palace Evening there is no sign of revanchist revolution. Instead the atmosphere is of historic disconnect. “The palaces are lovely to look at but I don’t feel it has anything to do with me,” said Gabrielle Lehmann, visiting from the eastern city of Magdeburg. “For most Germans, I think, this might as well be Versailles.”