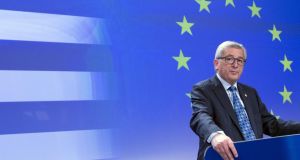 European Commission President Jean-Claude Juncker gives a statement on the situation in Greece, at the EU commission headquarters in Brussels. Photograph: Reuters/Yves Herman

Jean-Claude Juncker took to the podium in the packed European Commission press room yesterday, but his focus was not the swarms of journalists that had gathered to hear him speak. The commission president’s message was clearly directed at the Greek public.

Calling on the Greek people to “speak up and shape their own destiny”, he urged Greece to vote Yes in next Sunday’s proposed referendum, warning: “No would mean that Greece is saying No to Europe. ”

In essence, his surprisingly lengthy speech was an attempt to set out a defence of the bailout proposal offered by Greece’s lenders. Following months of fruitless negotiations with Athens, the frustration in Brussels about continuous leaks from the Greek side has become palpable over the last week.

In an unprecedented move, on Sunday the commission published the latest version of the bailout proposal that was under discussion before negotiations broke down on Friday. Accusing Greece’s leaders of “playing one democracy against 18 others”, Mr Juncker said yesterday that Greek citizens “deserve the whole story, the truth”.

He argued that he had personally done “everything that can be done to facilitate a deal – on progress and on substance”, pointing out that the bailout proposal contained no wage cuts and no cuts to the nominal pensions for current retirees.

The substantive question over the next 24 hours is whether the commission’s offer to “keep the door open” for Greece to return to the negotiating table means it is committed to striking a new deal before the referendum. EU figures from Mr Juncker to eurogroup chairman Jeroen Dijsselbloem to French president François Hollande were united yesterday in pleading with Greece to re-engage with Europe in the coming days.

Nonetheless, privately, EU officials were less than sanguine about the prospect of an 11th-hour deal. “They dropped a bombshell on Friday, the trust is gone,” said one senior EU source. Officials stressed there was now no chance of the second bailout being extended when it expires tonight. The eurogroup of finance ministers is particularly opposed, with France the only country to take the side of the Greeks at Saturday’s eurogroup meeting.

Once the deal expires, EU officials insist, the €15.5 billion of funding on the table over the weekend expires with it.

While yesterday’s request by Greece’s prime minister, Alexis Tsipras, for an extension of the bailout, in a letter to all eurozone leaders, could signal a willingness by Greece to return to the negotiating table, most officials in Brussels saw it as a PR tactic. By requesting something already denied and no longer technically possible, given that an extension would need parliamentary approval in several member states, Mr Tsipras can now demonstrate to his public that he tried his best to secure a bailout extension.

The only possibility of a breakthrough could be Greece applying for a third bailout through the European Stability Mechanism (ESM) fund. This could happen before or after the referendum, with a third rescue package perhaps forming the basis of a renewed relationship with the euro zone should the Greek public vote Yes.

The European Central Bank (ECB) will also play a central role in developments over the coming days. While the introduction of capital controls has given breathing space to the Greek banking system, the ECB could still decide to impose haircuts on the collateral it accepts from Greek banks in exchange for emergency funds.

The International Monetary Fund’s response to the expected nonpayment of Greece’s €1.5 billion rebundled payment to the fund today will also be crucial. Most credit-rating agencies have indicated they would not classify the nonpayment as default as it was owed to official rather than private creditors. While technically, nonpayment to one of the troika institutions constitutes a default to the others, the ESM fund has indicted that member states are not prepared to push this requirement.

Whether the nonpayment of the IMF loan will trigger an ECB response on the provision of emergency liquidity assistance will also come into play over the next 24 hours.

While there was some evidence of contagion threats yesterday as Spanish and Italian bond yields rose, the threat of contagion appears limited, particularly given the ECB’s access to instruments such as outright monetary transactions and a bond-buying programme that could be used to help bolster the euro zone economy.

More than contagion, the geopolitical context may determine whether the lenders are prepared to go the extra mile to avert a Greek exit. The intervention of US treasury secretary Jack Lew and US president Barack Obama’s conversation with German chancellor Angela Merkel indicate Washington’s interest in keeping Greece in the euro – and not just because it has a substantial holdings of euro reserves.

As a Nato member, Greece is a vital strategic ally for the US, and any tilt to Russia by a Syriza-led government would be strongly resisted by Washington. Syriza’s conciliatory gestures to Vladimir Putin have also annoyed eastern European member states in particular.

Over the coming days it is likely to be politics rather than economic concerns that determines whether an 11th-hour deal can be struck to keep Greece within the euro.